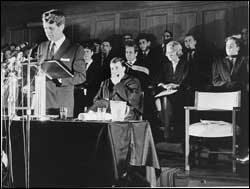 Jameson Hall has witnessed many momentous events over the years. One of the most important occurred 40 years ago this week. In 1966 apartheid was at its height, and liberals in despair. On June 6 the Jameson Hall was packed and a vast crowd outside waited for the 40-year old Democratic Senator for New York, Robert F Kennedy, to deliver the National Union of South African Students' annual Day of Affirmation speech.

The former US Attorney General began in a thin, wavering voice to compare the United States and South Africa. His voice gathered strength as he went on to say: "We must recognise the full human equality of all our people- before God, before the law, and in the councils of government. We must do this, not because it is economically advantageous - although it is; not because the laws of God and man command it - although they do command it; not because people in other lands wish it so. We must do it for the single and fundamental reason that it is the right thing to do."

He then exhorted his largely student audience to reject the idea that they could do nothing about the world's problems. "It is from numberless diverse acts of courage and belief that human history is shaped," he said. "Each time a man stands up for an ideal, or acts to improve the lot of others, or strikes out against injustice, he sends forth a tiny ripple of hope, and crossing each other from a million different centres of energy and daring those ripples build a current which can sweep down the mightiest walls of oppression and resistance."

His UCT speech is recognised by scholars of Kennedy as the finest he ever delivered. It included sentences that his brother was to quote at his funeral and that are inscribed on the walls of the John F Kennedy Presidential Library in Boston.

In 1966 he helped remind those involved in anti-apartheid work that they were part of a noble tradition, that must in the end triumph. Kennedy himself was assassinated exactly two years later, on 6 June 1968. Had he been elected President later that year, and not Nixon, US policy to apartheid South Africa would have been very different.

Thanks to our library having a subscription to the electronic journal Safundi, we at UCT can not only read the full speech, but also hear RFK delivering it. Go to 'Ripple of Hope in the Land of Apartheid: Robert F. Kennedy in South Africa, June 4th-9th, 1966', in issue 9 (May 2002), at www.safundi.com.