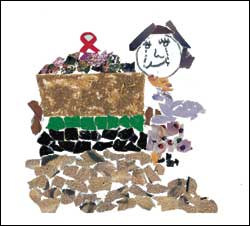 As a precursor to Child Protection Week (May 28 to June 4), UCT's Children's Institute hosted a roundtable on child survival, one where leading experts from a range of disciplines discussed the country's regressive performance in this crucial human right.

"The roundtable was to bring a cross-disciplinary range of experts together, get consensus on what the key issues are and acknowledge that child survival warrants urgent attention," says Kashifa Abrahams, senior researcher with the Children's Institute.

South Africa is a signatory to the United Nations Convention on the Rights of the Child and the African Charter on the Rights and Welfare of the Child, which give all children the right to survival and wellbeing.

Yet every hour, 10 children under the age of five die. This means almost one in ten children will not live to see their fifth birthday.

Studies show that South Africa is one of seven African countries where child and infant mortality increased between 1990 and 2004, compared to countries like Uganda and Tanzania where the under-five mortality rate has decreased.

"The number of children's deaths in this country is unacceptably high and increasing," says Abrahams, "and most of these deaths are highly preventable."

The leading causes of deaths among young children were attributed to HIV/AIDS and poverty related diseases such as diarrhoeal disease and malnutrition. As the children grow older, they become more susceptible to unnatural causes of death such as trauma and violence.

Interventions such as antenatal care and prevention of mother-to-child transmission of HIV are considered to be effective in reducing infant deaths, while dealing with infectious diseases, trauma and violence would improve survival of older children.

"All these interventions do exist at various levels, but there needs to be an interconnection and strengthening of these programmes," Abrahams said.

Other issues that were discussed were inequalities in access to proper health care, especially in the rural areas of the country; the roles and responsibilities of families and communities in improving child survival and wellbeing and improved data collection systems and structures.

One solution proposed is an annual parliamentary inquiry into child survival, which would be done together with introducing mechanisms for improving the effectiveness of government programmes.

"Enhancing prospects for child survival requires an integrated strategy that includes but extends beyond a traditional medical model approach," Abrahams added. "It calls for collective action even at local government level. Hence an improvement in basic services such as water and sanitation, adequate housing and public infrastructure is crucial."

South Africa is gravely challenged to reach the Millennium Development Goal on child survival to which the government has committed to reduce its infant and child mortality rates by two-thirds by 2015.

The Constitution clearly states that child survival and development is a human rights issue that cannot be ignored. Greater efforts are needed to enhance prospects for child survival, making it a reality for all the nation's children.