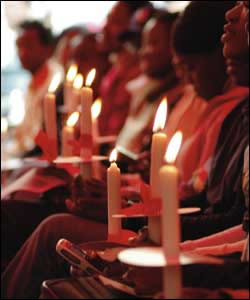 In remembrance: Students and staff take a moment to remember loved ones who have been lost to AIDS.

The Leslie Social Science quad came aglow with hundreds of candles on when students and staff gathered for the AIDS Candlelight Memorial.

The event, which was marked by the lighting of white candles, was held to commemorate the lives lost to AIDS and to give strength to those living with HIV.

The memorial was part of a broader campaign by HIV/AIDS Coordination (HAICU) to put a spotlight on stigma and change people's attitudes to the disease.

"It is perceived that there is a lot of stigma about HIV/AIDS; that people might see it as a death sentence." says Sean Brown, HAICU project officer. "This may stop people from coming for an HIV test or people who test HIV-positive from coming forward to receive available treatment."

Various speakers, including Tsotsi star Terry Pheto, spoke at the event, encouraging everyone to know their status.

HAICU also ran a competition calling for people to submit haikus on HIV- and AIDS-related stigma.

A haiku is a form of traditional Japanese poetry consisting of three lines, with five, seven and five syllables respectively.

The haikus were intended to get the UCT community to start thinking about HIV/AIDS stigma and the role they could play in changing mindsets.

The winning poems will be announced in June.

Brown says that stigma can result in people living with the disease worrying about being isolated and discriminated against at a time when they most need love and support.

Haikus poured in, and the trees along University Avenue were adorned with flocks of paper birds with red ribbons and the poems attached to them. The installation was designed by award-winning artist Heath Nash with the theme Birds in Flight representing the beauty and value of human life, which is also vulnerable.

"It's been really interesting to read the haikus and reflect on their messages. Some of them were quite profound," says Brown. "We felt that this campaign would reach people who may not be ordinarily interested in knowing about AIDS. I believe that we have succeeded in raising the profile of HIV/AIDS on campus."

The birds with their haikus have now mostly flown from upper campus (some into people's pockets), but it is hoped that their messages will linger, changing the attitudes and lives of those who have read them.

"I want to ask you
But I shiver, uncertain
Will you embrace me?"

For more information and advice on HIV/AIDS, contact HAICU on freephone