Ikeys give Maties a real fright 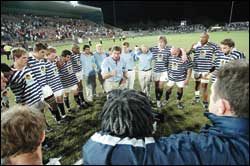 Tough talk: Coach Dave Mallett lifts his team's spirit after a close-fought game against Maties in the annual intervarsity in Stellenbosch.

On the 12 May, UCT travelled out to Stellenbosch once again to play at the famed Danie Craven Stadium under the ever-looming Stellenbosch mountains.

Intervarsity kicked off with the 2nd XV starting the day with a convincing five-try victory over their co-log leaders, the 'MakÃ¶tters'. Unfortunately, the U20 could not withstand the Stellenbosch side which was laden with SA U19s players.

On came the 1st XV, with high hopes of a victory as Stellenbosch had gone down the week before. The game was a tightly contested affair with both sides taking the lead throughout the game.

HandrÃ© Schmidt scored two tries, one of which came about after a penalty hit the left upright and bounced down into the 22m area, where he pounced on it.

UCT led 9-8 at the end of the first half. But despite two tries in the second half and some eleventh-hour pressure, UCT could not cross the Maties line one more time as their rivals' defence was solid. Even with some outstanding play from the likes of Craig Klue, Chris Rood, Schmidt and Saqi Gqeba, UCT were unable to finish the game on top.