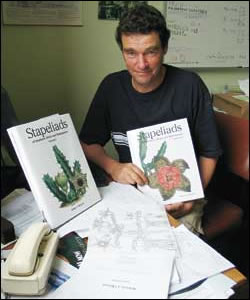 A mathematician specialising in the theory of permutation groups, Dr Peter Bruyns is an unlikely author for a monograph on Stapeliads, those almost alien-looking, fleshy-stemmed succulents with their striking, star-shaped flowers belonging to the family Apocynaceae and quite plentiful in the drier parts of Africa.

Twenty-five years in the making, his monograph is the first complete account of the group since American botanists Alain C White and Boyd L Sloane's three-volume The Stapelieae, published in 1937.

Bruyns' work deals with all 182 of the region's Stapeliads in great detail, including his own illustrations, line drawings showing the small details of the complex flowers, as well as photos and distribution maps.

"Today copies are valuable and much sought after."

But in the decades since 1937 there has been plenty of exploration by doughty botanists, leading to the discovery of many new species. "It also led to the realisation that many of the species discussed by White and Sloane, who never had the opportunity to see any of these plants in their natural habitat, were not species at all."

Bruyns' replacement monograph is timely, bringing together many disparate sources, the results of the exploration and research that has taken place over the past 60 years on Southern African Stapeliads, those found in Botswana, South Africa, Namibia, Zimbabwe, Mozambique and Madagascar.

Bruyns is an unusual person: one of those rare academics who are highly qualified in two, disparate areas. He has a DPhil (mathematics) from Oxford (1986), where he was a Rhodes Scholar, and an MSc in botany from UCT (1994). He is a research associate of the Bolus Herbarium, conveniently next door to the mathematics department on University Avenue.

While mathematics perhaps requires more introspection, botany takes him tramping in the foothills, valleys and mountains of the more arid parts of Southern Africa, hunting down these succulents in the search of new information on them and their habitats and, ultimately, to unravel their relationships to one another and other members of the family.

The fascination lies in their cryptic habit (they are notoriously difficult to find in the wild), the curious geometry of the stems and the remarkable symmetries of the flowers, as well as the amazing variety of different strategies that they employ to persuade insects to visit their flowers and pollinate them, Bruyns says.

"In the Stapeliads, the flowers are specialised exclusively for fly pollination. This is partly a response to the wide variety of flies in the region they grow and also partly because, in these areas, periodic dry periods cause flies to be often the only insects that are plentiful."

The pollination modes are especially delicate, in some cases, akin to a complex docking system where the tiny pollen bags carried by the fly are deposited in the receptor flower.

Bruyns does most of his fieldwork during sabbaticals, after the rains when the plants are in flower. For this, he's tramped some of the world's remoter places in search of specimens: Eritrea, Ethiopia, Yemen, Nepal, the Canary Isles and Burma.

For the local specimens, he's been to the coldest climes in Sutherland, and the warmest and driest in the Richtersveld. He even found a new species in the high and dry mountains near Willowmore, Ophionella willowmorensis.

Bruyns has been drawn to Stapeliads since childhood, when White and Sloane's book was his bible. His own monograph has been a marathon process; 25 years in the making and five years to publish. At over 600 pages long with around colour photos, the two-volume publication is a weighty thing.

- Stapeliads are the most highly succulent members in the tribe Ceropegieae belonging to the sub-family Asclepiadoideae of the Apocynaeae family.

- They are all fleshy-stemmed succulents that are more or less without leaves and only rarely have thorns.

- There are 326 species of Stapeliads with 182 occurring in Southern Africa (south of 17oS), distributed through 19 genera.

- All but four of these genera are endemic to the region.

- The few spiny stapeliads that exist mainly occur in Southern Africa and belong to the genus Hoodia. They are being used in the fight against obesity.