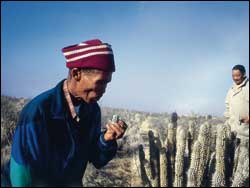 Fat of the land: The Hoodia plant has been used by the San people for centuries to stave off hunger and thirst on long hunting trips. Now it's being hailed as a miracle cure for obesity, resulting in benefit-sharing agreements between the San and commercial growers.

It's a spiky cucumber-like succulent plant that grows in the country's driest region, home to the ancient San people. For centuries they've used Hoodia to stave off hunger and thirst on long hunting trips. Now it's being hailed as a miracle cure for obesity, fooling the body into believing it is full. It stands to make San communities very wealthy once products are on the shelves.

But its success is a double-edged sword. As a geographically scattered group, who decides for the San how the resources should be used? It's a thorny social and ethical issue that will set precedents worldwide. To this end, the Environmental Evaluation Unit's (EEU) expertise has been harnessed in a new, two-year research project with the Wellcome Trust and the University of Central Lancashire.

Heading the UCT thrust is senior researcher Rachel Wynberg, a PhD scholar with a long track record. Wynberg is a natural scientist and environmental policy analyst with more than 15 years' experience in the environmental field with a raft of publications. With two master's degrees (marine biology and environmental science), she specialises in issues to do with the commercialisation of biodiversity, intellectual property rights and traditional knowledge, and the integration of social justice and ethics into biodiversity.

She has recently submitted her doctorate on pro-poor models of biodiversity commercialisation at the Graduate School of Environmental Studies at the University of Strathclyde, Glasgow.

"My recent work looks at the way in which plants like devil's claw, rooibos tea, honeybush tea, Hoodia and marula can be traded in ways that deliver benefits to marginalised communities and that protect the environment and result in social justice."

Indigenous knowledge and material is protected by the Convention on Biological Diversity, which demands equal sharing of any benefits flowing from the use of traditional knowledge about biodiversity with indigenous communities.

Hoodia's main ingredient is reportedly about times as active as glucose. It hoodwinks the brain and nerves into telling the body it is full. As obesity is a growing Western medical problem, the commensurate benefits on the pharmaceutical and dietary supplements side are enormous.

And the or so San scattered along the edges of the Kalahari Desert, many displaced, stand to benefit from the royalties they have won, with assistance from their lawyer Roger Chennells.

Despite the Hoodia case having been splashed across the world's press, no-one has tackled an in-depth assessment of the decision-making process used by the San and other parties to negotiate the agreement, and the sharing of benefits that will arise from the plant's commercialisation.

"This is one of the first research attempts to look comprehensively at some of the social and ethical issues it raises," Wynberg said.

To date, few benefit-sharing agreements with indigenous communities have been concluded successfully. One of the most significant of these was concluded in 2003 between the San and the Council for Scientific and Industrial Research (CSIR) (they first conducted research on the plant as a means of survival for the South African Defence Force back in the 1960s) covering a range of legal and social issues and outlining the establishment of a trust to manage the funds on behalf of the San. The trust was formed in 2004 and the first payments received in 2005. This forms part of a licensing agreement between CSIR and the consumer products giant Unilever plc. Another agreement has also recently been concluded between the San and the commercial growers of Hoodia to give the San a share of benefits from the sale of cultivated material for herbal markets.

Similar cases arise in other developing parts of the world where indigenous plants and knowledge are involved. In this context, many important questions remain unanswered and the international community would benefit significantly from an analysis of this agreement and its implementation to provide "lessons learned" in the field.

National legislation on access to genetic resources and benefit-sharing is in its infancy worldwide. There are many issues around prior informed consent and benefit sharing and the legal implications and sharing mechanisms like trust funds. To this end, the EEU has also been contracted by the Department of Environmental Affairs and Tourism to assist in the development of South African regulations on access and benefit-sharing.

"The urgency of the matter and the number of biodiversity-rich countries in need of legislative developments make our project very timely," Wynberg said.

"To analyse the best-known benefit-sharing cases in detail, and the way in which the prior informed consent of communities has been obtained, will provide a good example of how the issue can be handled by national legislation."

She will be working with a large international team of researchers, headed by the leading bioethicist Dr Doris Schroeder (UK) and including Chennells, Dr Miltos Ladikas (UK), and Saskia Vermeylen (UK), who is conducting doctoral work on the San. Collaborating partners include the University of the Philippines, the national Ethics Commission (Mexico), and the Indian government. External advisors hail from Australia and Europe.