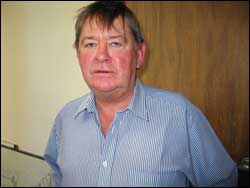 Winning talent: Prof Dave Dewar is one of UCT's winning team of architects and planners.

Staff at the School of Architecture have scooped the only 2006 national award in the category of Best Sectoral Planning Project at the South African Planning Institute's international conference.

Deputy dean of the engineering and the built environment faculty, Professor Dave Dewar, and part-time lecturers Piet Louw and Barbara Southworth received the award for the project, A Long Term Spatial Development Framework and Urban Design Concept for the University of Cape Town.

Dewar explains: "The project aims to consolidate the development of the university into an integrated framework and move away from the fragmented approach of three separate campuses. It also touches on sustainability as it aims to open up the university space to the surrounding community."

The international conference is held every four years.

In addition, staff have received recognition from the Architecture Journal.

Director of the school, Associate Professor Lucien le Grange, together with Louw and Dewar, were honoured with merit awards for planning and design for their work on the Klipfontein Corridor project.

Dewar and Louw have also received a merit award for work on Freedom Square in Windhoek.

"I think it's important to note that the work done by the academic staff in their private capacity contributes significantly to the creative side of the school's research, which has increased significantly," says Dewar.

Students in architecture would do well to pay close attention during lectures.