Experts pull together against bird flu 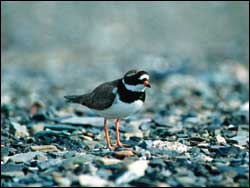 Long distance: The Common Ringed Plovers that reach us breed in the same area as the Red Knot, but their range extends to the extreme eastern end of Russia. It reaches us through the Middle East, and must cross the Sahara.

The birds from the far east of Russia fly to Africa (there are no recoveries of ringed birds to prove this, but there is nowhere else they can go, says the ADU's Prof Les Underhill.) of all long-distance migrants apart from seabirds, these birds migrate the farthest.

Knowledge centres such as UCT's Avian Demography Unit, where the South African Bird Ringing Unit (SAFRING) is located, will be essential to South African efforts to track the role that migratory wild birds play in introducing the highly pathogenic H5N1 strain of bird flu to this country.

Just two years ago a milder strain of bird flu, H5N2, almost felled the local ostrich industry. The European Union quickly imposed a ban on ostrich imports from South Africa, and the industry is just recovering. The outbreak was reportedly linked to migratory wild birds.

Although South Africa has no reported incidents of the current H5N1 outbreak seen in Asia, Europe and northern Africa, authorities are gearing up for all likelihoods.

"From the side of South African government, avian flu requires the various departments responsible for the environment, human health and animal health to interact in new ways," said the Avian Demography Unit's director, Professor Les Underhill.

This much was clear from the recent bird flu seminar hosted by the ADU at the behest of the Taiwanese Liaison Office in Cape Town.

"Avian flu has necessitated various groups of researchers, who previously saw little need to interact, to work together and learn about each other's disciplines," Underhill added.

He said he'd been particularly pleased that the seminar was attended by MPs belonging to the Parliamentary Health Portfolio Committee.

According to speaker Dr JP Kitching of the state veterinary services (laboratory services, Western Cape), South African authorities are treating bird flu as a veterinary problem at this stage.

"From the ADU side, our aim was to inform a broad audience about bird migration," Underhill said. "We knew that we would be speaking to people who were specialists in a variety of other fields, especially human health and animal health, plus the media, but with sketchy ideas of bird migration."

Bird ringing provides the basic information through which bird migration is studied.

"The most important thing that the ADU can do is to use its network of citizen scientists to do surveillance. In particular, we have been asked by Dr Celia Abolnik at the Animal Research Council in Pretoria to assist when the water bird migrants return from their breeding grounds in northern Asia next spring. In particular, this will involve training bird ringers to take the appropriate samples."

The ADU already has skills in this direction. Doug Harebottle, co-ordinator of the ADU's Co-ordinated Waterbird Counts (CWAC), participated in a surveillance project at Lake Chilwa in Malawi last month and has been trained in the sampling protocols.

Launched in 1992, CWAC monitors South Africa's waterbird populations and the conditions of the wetlands, which are important for waterbirds, monitoring over 540 wetlands around the country. Significantly, CWAC has an enormous database on these migratory waterbirds. And large data sets are what government agencies are looking for right now.

As yet, there is no consensus on whether or not wild birds are victims or vectors (carriers of disease) of avian flu. Certainly, there is no clear overlap between the flyways of migratory wild birds and the recent outbreaks of bird flu.

"The story is a complex one," says Underhill. "At the moment it looks likely that most avian flu outbreaks can be attributed to the transport of poultry."

The new transcontinental industrial poultry trade is a major problem. With genetically-eroded material, poultry is being farmed on a massive scale, with poultry and poultry products being transported from continent to continent, particularly between Asia and Eastern Europe. Figures presented by the ADU postdoctoral fellow Dr Leo Bruinzeel show that Russia imports 11.7- million chickens a year and Romania 16.1-million.

Those who work with migratory birds further south in Africa are not taking any chances. After the recent outbreak of H5N1 bird flu in Nigeria, Niger and Egypt, local bird-ringers involved in catching inter-African migratory water bird species have been asked to take precautionary measures, stepping up hygiene and washing bird bags between ringing sessions.

"There have been no recorded instances of transmission of the disease between infected wild birds and humans," Underhill points out. "The risk of humans contracting the disease from wild birds is remote, unless there was excessive close contact with infected birds and their excreta."

Culls of wild birds are highly unlikely to stop the spread of the disease and are extremely difficult to implement.

"Culls have the potential to make the situation worse by dispersing infected individuals and stressing healthy birds, making them more prone to disease," he explained. "Moreover, it would divert resources away from important disease control measures."

According to ADU website, the recently-formed avian flu scientific taskforce for the UN Commission on the Conservation of Migratory Species called for regulation of animal markets, a restriction on global wild bird trade, improvements of bio-safety standards in poultry farming, global surveillance of A1 in wild birds and identification of the precise migratory routes of water birds.

The ADU is involved with the last two and working on a number of projects. These will identify the main migratory water bird sites in southern Africa, based on water bird survey data; catch and ring migratory water birds, obtaining A1 samples from water birds, and training local water bird ringers and ornithologists; map the current distribution of water birds in South Africa, map the occurrence of poultry and map the distribution of people (which should lead to spatial analyses of high risk areas); and manage the ringing databases for the whole of Africa (AFRING) and South Africa (SAFRING).

Bruinzeel puts it neatly: "After the pressure cooker of power cuts, bird flu simmers on a hotplate nearby."

(For more information go to the ADU website: http://www.aviandemographyunit.org.)