Mountains of Argentina tricky, but worth the climb 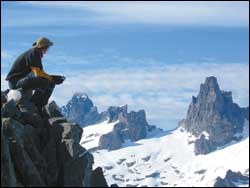 A perch with a view: Richard Halsey takes a quiet moment atop Cerro TrÃ©s Picos.

If UCT's Mountain & Ski Club was after an old-style exploration into lands and up peaks that few had previously set foot upon, then, by all accounts, its month-long expedition in Argentina last year delivered the goods, and then some.

What the club was looking for, when people first floated the idea last year, was a flagship project that was off the beaten path.

"We wanted to do something that was going to take planning and preparation," says club chairperson Anthony Hall. "A real expedition into the unknown."

Destinations in Uganda and the Himalayas were proposed, but the club, after considering costs and altitudes, settled on a few hardly-scaled peaks in Andean Patagonia in the extreme southwest of Argentina. In late November 2005, 11 members of the club touched down in Argentina in two batches.

The trip almost ended before it started for the first group of nine.

To get in some practice, as few had done any ice climbing or mountaineering in serious snow, the group attempted the better-known Mount Tronador, within reasonable distance of help and a small local town. The group had to turn back though, when the weather took a turn for the worse and visibility was substantially impaired, but on the way down passed two more experienced climbers who chose to brave the storm. A week later, the UCT group heard that the pair had died on the mountains.

It put things in perspective for the group, illustrating again the dangers of mountaineering. "It really drove home the extent of our ambitions," says Richard Halsey.

Then the adventure really began. Their final stop was the Cerro TrÃ©s Picos, a peak scaled, according to a local fishing guide, by no more than 20 people in all.

Getting to Cerro TrÃ©s Picos took some doing, though. The group had to negotiate their way to the peak from Lago Cholila - a remote lake surrounded by mountains and glaciers - crossing rivers and crashing through thick bamboo forests to get there.

However, with only topographical maps, no directions and no path, it turned into a no-holds-barred expedition for the group. They often caught glimpses of Cerro TrÃ©s Picos, but it took five days of false turns before they finally found the best route to the base camp.

No one ever really thought of giving up in those five days. But a few suffered from, as Halsey would put it after following another dead-end path for hours, "a serious case of humour-failure".

The snow-wrapped Cerro TrÃ©s Picos was everything the group had hoped for, and a few things they hadn't. Conditions had made the rock brittle, and negotiating the way up was extremely dangerous. Put a foot or a hand wrong and a rock - often up to the size of a bar-fridge - would break off and plunge down the mountain. "The rock was s**t," summarises Halsey.

A huddle was called, and for safety reasons it was decided that only groups of two would attempt the peak at one time. Halsey and Craig Peters went first, and once they returned were followed by Hall and Ake Fagereng.

The view at the top was stunning. "Just snow and peaks extending into the expanse of the Andes," says Hall. Mount Tronador (which they later climbed successfully) could even be seen far to the north.

Cerro TrÃ©s Picos was but one of many objectives in the area, and each climbing party - picking up new skills along the way - attempted some of the other peaks and ridges.

"We just had wanted to learn and do something new," says Shachaf Polakow, part of a group who scaled Peak 1991 (that's the height in metres). There's a chance, think some, that they were the first to do so.

That was just in keeping with the expedition motto, says Hall. "The whole objective was for everyone to push the envelope, whatever level they were at."