Energy sums shows bicycles are the way to go 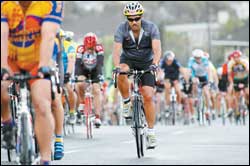 Ever wondered how much energy the cyclists participating in the Cape Argus Pick 'n Pay Cycle Tour produced?

A reasonably fit cyclist can continuously generate about 100W of power, enough to light a standard light bulb, says Professor Trevor Gaunt of the Department of Electrical Engineering.

Maybe this energy can be put to good use to address the current energy crisis in the Western Cape? The City of Cape Town has an electricity demand of which means that the energy produced by all the cyclists could power the city for only 25 seconds.

Considering "conventional" transport options, if each of the cyclists decided to drive the same 109km route in separate cars, they would have used around of energy, assuming a fuel consumption of eight litres per 100km and 9.5kWh of energy per litre of petrol. Enough to power Cape Town for one hour and 20 minutes.