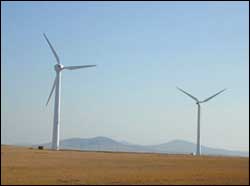 Bernard Bekker and Trevor Gaunt of the Department of Electrical Engineering at UCT discuss energy options.

When looking out over the spectacularly beautiful Cape Peninsula covered by a dirty brown haze of air pollution, the dream of a society running on clean energy seems depressingly far in the future. Yet, do the recent electricity blackouts not offer us a perfect chance to start building this clean energy future? Why not require that all new electricity generation utilise clean, renewable sources like the wind and sun? After all, the Western Cape has an abundance of both.

Instead, Eskom recently revealed a rescue plan based on petroleum and nuclear fuels, both somewhat suspect from an environmental point of view: two new open-cycle gas turbine peaking power stations generating 1GW by the first quarter of next year, a new baseload gas turbine power station in the Western Cape by 2010, and nuclear (including PBMR) generators after 2012.

To understand Eskom's decisions, it is informative to compare nuclear and gas with widely used renewable technologies like wind turbines and photovoltaic (PV) panels. The table below compares the different technologies applied to baseload generation (generating for most of every day, not just during peak demand).

It is evident that financial cost and land use are significant obstacles to the implementation of clean renewable technologies.

Regarding the large areas of land required by renewable technologies, South Africa's laws require that an environmental impact assessment be done on all land earmarked for electricity generation. The bigger the area, the more extensive the impact assessment will need to be (the assessment for the 0.4km2 Klipheuwel wind farm near Cape Town took two years, and for the Darling wind farm four years). Given the urgency of the current problems with peaking generation in the Western Cape, Eskom could not afford to wait that long.

Another factor that influenced Eskom's choice would have been the fact that nuclear and gas can generate at all times of the day or night, while renewable technologies only generate when the sun shines or the wind blows. For example, the highest demand usually occurs in winter, yet the hours of sunshine are lowest in winter, while the wind in the Western Cape blows strongest in summer - visit any beach in December for firsthand verification.

Does this mean that electricity from renewable sources, and all the benefits associated with it, from clean air to energy security, has no role to play in the Western Cape in the next five to 10 years?

That depends largely on the government, as illustrated in Germany and the US (18.5GW and 9GW installed wind capacity by 2005). The German government subsidises new wind turbines with R0.77/kWh for the first five years, after which the subsidy decreases, while PV is subsidised by R3.15/kWh, decreasing by 5% per year.

California announced a solar initiative in December 2005 that will subsidise large-scale commercial PV projects by 70% or more.

Research into renewable energy technologies is also crucial, in order to bring down the cost and increase the efficiency of the technologies (and in the process decrease the land requirements).

Government plays a crucial role in making sufficient funds available for such research. In the case of the Western Cape, research support will allow the province to position itself for a renewable energy future, even if subsidies are not available to create such a future today.

Without dramatic subsidies, renewable electricity will stay a dream for at least the next few years. However, realistic energy policies to support sustainable energy research and practical implementation can lead the way in turning dreams into reality.

We might yet live in a society powered by clean energy in the not so distant future. Patience!