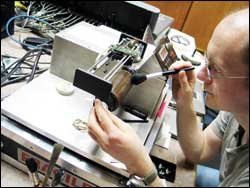 Brushing up: Will Prentice, an ethnomusicologist from the British Library's National Sound Archive, cleans dust from a wax recording cylinder and inspects it for mould.

Extinct San languages recorded on wax cylinders by ethnographer Dorothy Bleek and historian and musicologist Percival Kirby in the early 1900s will soon be available to a wide audience of scholars and language experts, thanks to a National Lotteries-sponsored project driven by UCT Libraries, Iziko Museums and the British Libraries' National Sound Archive (NSA).

For three weeks the NSA's expert ethnomusicologist, Will Prentice, was holed up in an SABC sound studio, digitally capturing the once lost sounds of San from 100 old wax recording cylinders. These recordings will provide an audial snapshot of languages never heard.

Bleek was the daughter of noted philologist Dr Wilhelm Bleek who, with his sister-in-law, Lucy Lloyd, recorded and documented the language and folklore of the /Xam and !Kung in the late 19th century.

Dorothea continued their work, recording and documenting the San languages of Southern Africa. Her most important work, published after her death in 1948, was A Bushman Dictionary.

In 1911 she visited the Kenhardt area where some of the San informants interviewed by her father and aunt had originated. Subsequent travels took her as far as Tanzania.

"The wax cylinders are unique, recorded in the field by Dorothea Bleek, Percival Kirby and others and date from around 1905 until the 1930s," Lesley Hart, manager of the Libraries Special Collection Information Services, confirmed.

"It is quite possible that those recorded by Dorothea of San peoples in the Northern Cape in 1911 may allow us to hear San languages that are now extinct," she added. "Dorothea also transcribed some of these recordings so we have contextual information around them."

It was inventor extraordinaire Thomas Edison of light bulb fame who pioneered the development of the phonograph cylinder in the 1870s, using a strip of tinfoil wrapped around a rotating metal cylinder.

But a decade later, hard wax cylinders were being mass produced. Recordings were engraved on the surfaces and played on mechanical phonographs. The cylinders could be shaved smooth for new recordings. Wax was later replaced by hard plastic or celluloid.

Valuable resources they may be, but the old wax cylinder recordings present formidable challenges. Not only is the requisite equipment and expertise hard to come by, but with age the wax becomes brittle and highly susceptible to mould, which feeds off the surface, degrading the sound. Many wax cylinders in the Kirby Collection are cracked.

Prentice's equipment looks deceptively simple but has been built from various old phonograph pieces, the most important being a particularly light and sensitive stylus.

Once the recordings have been digitised, Prentice will clean them up to a certain extent, getting rid of background and other corrupting sounds. Because of the distinctive clicks of the San languages, however, this cleaning-up will be minimal in order not to erase intrinsic parts of the speech.

When Monday Paper visited the climate-controlled SABC studio (provided free of charge for the duration of the project) the temperature outside had settled at around 40 deg C. The idea of recording on wax cylinders in the high temperatures of the Northern Cape seemed impossibly remote.

Prentice has already digitised over wax cylinders for the NSA's own ethnographic sound archive. UCT and Iziko Museums will retain rights to the recordings but the British Library will have a set of the recordings for research purposes.

Hart, who conceptualised the project, likes to think of it as opening a door that was once closed.

The Bleek and Lloyd Collection consists of papers of Dr WHI Bleek (1827-1875), his sister-in-law, Lucy Lloyd (1834-1914), his daughter, Dorothea Bleek (1873-1948), and GW Stow (1822-1882), relating to their researches into the San (Bushman) language and folklore, as well as albums of photographs. Bleek developed a phonetic script for transcribing the characteristic clicks and sounds of the /Xam language, which is used by linguists to this day. Although some of the material was published by Lucy Lloyd and Dorothea Bleek, and, more recently, by David Lewis-Williams, a great deal remains unpublished. The material provides an invaluable and unique insight into the language, life, religion, mythology, folklore and stories of this late Stone Age people. The Bleek and Lloyd Collection is housed in the Manuscripts and Archives Department and has been listed in UNESCO's Memory of the World Register as a collection of unique world significance. Iziko Museums and the National Library of South Africa also hold important Bleek and Lloyd collections. The recordings from the Kirby Collection were acquired by UCT, along with Kirby's valuable collection of African musical instruments, in the early 1980s. An important project to restore this historic collection is currently underway, also sponsored by a grant from the National Lotteries.