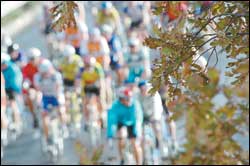 The Cape Argus Pick 'n Pay Cycle Tour is more than just the bikers who Lycra up for the 109km challenge around the Cape peninsula.

Think about the staff on call on the day, the 40 trucks that lug equipment around, the medical personnel, the 70 ambulances, the motorbikes. And let's not forget the thousands of spectators lining the streets, or the tens of thousands of water and energy-gel sachets chucked by the cyclists. Or the noisy helicopters keeping an eye over things from the skies above.

Then consider that, not even counting the residential areas that make up part of the course, a long stretch of the race runs through the Table Mountain National Park (TMNP), rich in precious fauna and flora.

It's an environmental accident just waiting to happen.

Neither the province nor the tour organisers were going to just stand by and watch it happen, though. A few years ago, in a more-than-just-cosmetic show of good citizenship, the Cape Argus approached UCT's Department of Environmental and Geographical Sciences (ENGEO) to draw up an environmental management plan (EMP) for the race.

ENGEO put the project in the care of three MPhil students - Roger Prior, Carol Purnell and Alastair Sempill. Over the next months the group worked hand in cycling glove with race organisers and the City Council.

For the most part, the students had to invent the wheel. No sport in the country, and no cycling event in the world, had ever had an EMP.

"There was no precedent that we could find," says Sempill.

The EMP covered all the race's bases, spanning the institutional impact of the event (which talks about the other institutions, like the National Park, that are affected) to noise to litter to the fauna and flora.

The plan had, however, been taken up only piecemeal since 2002. That changed two weeks ago. The 2006 race is historic as it was the first where, as part of the Argus' Integrated Management Plan, the EMP was implemented lock, stock and barrel.

"In many ways our Integrated Management Plan is driven by the environmental management plan requirements," says Ken Sturgeon, one of the Argus organisers.

And the rest of the cycling world is taking notice. The International Cycling Union (aka the Union Cycliste Internationale, or UCI), which incorporated the Argus into its Golden Bike Series in 2001, has just announced that it would accept the Argus EMP as its world standard, and will apply it to all its races.

The wheels of environmental care are now well in motion.