Uphill and around the bend 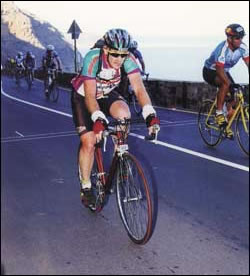 He's amassed thousands of travel kilometres island- and continent-hopping for the cause, but converted to the joys of cycling 11 years ago. Since then, he's raced his way to another milestone: in five seasons for the Pedal Power Association.

Let's put that in perspective: "The Earth's diameter at the Equator is which I have exceeded at Pedal Power Association rides since I started riding with them in 1995," he notes.

With over members, the PPA is reportedly the largest cycling club in the country, an offshoot of the venerable Cape Argus Pick 'n Pay Cycle Tour.

Cooper first rode for the PPA in 1995 on his 1993 model Specialised Rockhopper mountain bike (he'd hired one in Yosemite National Park and the bug bit), the same bike that took him through three Arguses (1994-1996). He now rides a Cannondale R600 CAD3 road bike.

Cooper easily clocked the distance for qualification in the -in-a-season target for the PPA 2 000km Club awards, but overseas travel commitments meant he was missing the next mark: the in a season.

"My best seasonal total to date was over 30 events in 2002/3." Seeking a new solution, Cooper persuaded the PPA to introduce the Club in 2005.

"I argued successfully that this should be a prestigious award, difficult to achieve, that needed perseverance and commitment, and not just the steady accumulation of kilometres over the years. So the rule finally adopted is that to join the Club one has to first become a member of the Club five times, although the years taken to attain this total do not necessarily need to be consecutive."

Cooper exceeded the target descending Slangkop into Kommetjie, qualifying for his PPA Club black cap. He's now wondering if he should moot for a PPA Club.

In which case, he's half way there.