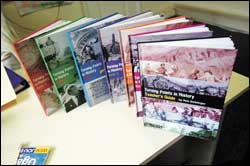 What major events do you regard as turning points in South Africa's past?

Perhaps they go further back to the Mfecane or the mineral revolution.

This question would probably spark a lively debate at any dinner party, with different opinions flying back and forth.

It is this debate that a series of history booklets, for grade 10 to 12 teachers, is encouraging by working through momentous stages that stand out, and what these mean to South Africa as a nation.

Titled Turning Points in History, the set of seven booklets consists of essays packaged into six turning points, beginning with Ancient Civilisations and Global Trade, and ending with Negotiation, Transition and Freedom, and a teacher's guide.

The series, published by the Institute for Justice and Reconciliation and the national Department of Education, was authored by 22 South African academics, including UCT's Professor Christopher Saunders and Dr Mohamed Adhikari, both of historical studies, and Dr Sean Field (Centre of Popular Memory), and edited by a committee led by Professor Bill Nasson (historical studies).

The teacher's guide was written by Associate Professor Rob SiebÃ¶rger (School of Education), rounding off the UCT influence.

Describing South Africans' collective memory of the past as "a mosaic of different accounts and interpretations", the books encourage readers to acknowledge the experiences of all the different groups, and to take into account the wide variety of explanations available before developing their own informed perspectives.

This fresh, inclusive angle of looking at history has become essential for schools, especially teachers who play a pivotal role in shaping pupils' understanding of past events.

In what is probably an historical feat on its own, a set of booklets was sent free of charge to all high schools in the country, thanks to overseas funding. It emerged though, that teachers would need further guidance in using the materials effectively.

Subsequently, 12 lesson modules were developed from the teacher's guide and put onto an interactive CD, together with a multimedia introduction and the text of the book, a possible first in South African education publishing.

SiebÃ¶rger has run training workshops for teachers and history curriculum advisers in all nine provinces, to familiarise them with the series and to demonstrate the teaching methods required for the new grade 10 to12 history curriculum.

The lively discussions that came up during these workshops helped participants to realise the importance of looking at historical facts in a questioning way, to see that one interpretation is not always necessarily cast in stone, and that just about everything is open to debate.

SiebÃ¶rger explains that the Turning Points series is unique in that its focuses solely on South African history, compared to other textbooks that write on the history of South Africa along with other countries.

"There aren't many textbooks available at the right level of the curriculum that try to present the new face of South Africa," he says.

Published initially to coincide with the 10 years of democracy celebrations, these books could well be another turning point in professional development in education, by using history teaching as a tool for transformation and a means of mediating the past and the present.