Lens on the human condition 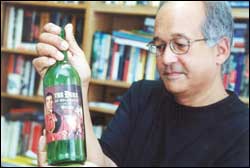 Bill Nasson is irked by the request for an interview. He's on sabbatical, writing a new book with a charming title: Springboks on the Somme: South Africa in the First World War. Having to publicise his recent National Research Foundation A-rating (A2) is like paying for excess baggage. An unexpected nuisance.

"History is just a job," he protests. "Not a great mission."

He may be dismissive of the achievement, but nonetheless it pegs him in the upper echelons of the country's historians. Frankly, it was time he was rated. Nasson has served on the NRF rating panel for three years and it would have seemed remiss not to do so.

Nasson was schooled at Livingstone High School when it was staffed by great educators like RO Dudley. He graduated from the University of Hull (where he got joint first class honours in English and history and a string of undergraduate honours) and has an MA in Southern African studies from York and a PhD in history from Cambridge.

At UCT, his cache of awards underpins a trio of passions: scholarship, teaching and writing. He has a Distinguished Teacher Award (1999), became a UCT Fellow in 2000 and is a winner of the UCT Book Award in 1993 for Abraham Esau's War: A black South African War in the Cape 1899-1902. It was a seminal publication, one that dissected an altogether neglected aspect of war and South Africa: the contributions of irregular soldiers and civilians.

His speciality is modern South African history, from the 19th century, with a lens on war and society, particularly the South African War and the First World War.

War fascinates him; it's a mirror of the human condition, involving judgement and analysis of barbarism, incompetence and morality.

Nasson prefers to think of himself as a writer of history, not a historian who writes. The work he has taken sabbatical to complete (the latter said with emphasis) is a study of South African experience of and participation in the Great War of 1914-1918. (White South African troops were known as Springboks.) He hopes it will be a "lively and witty" account. Penguin expect the manuscript by the end of the year (repeated with emphasis).

Nasson has published extensively on war, as the winding list of books and papers on his CV bears out.

"As an historian obviously I prefer the past to the present," Nasson says, glancing at the prepared questions for this interview. It brings him to the immediate past. What is the most important role of the historian at this juncture of South Africa's history?

"Ask the president," he quips.

In some respects, the current South Africa is not a place he altogether likes. The country has become a combination of "the grotesque and freakish", Jacob Zuma et al.

"We need a governor-general," he jokes, referring to the mismanagement, the power cuts.

But back to history ("historical studies" gets under his skin), and the tendency among scholars to over specialise.

"There is a danger of writing more and more about less and less."

A curiosity of his own past is that he never intended history to be a career. Not until he ran into Hull University's head of history on the London Tube. Professor John Kenyon persuaded the young Nasson to read for a PhD and gave him names of the institutions he should approach for funding.

At the time he was working for the Wold University Service as a refugee scholarships administrator and student welfare counsellor, a stressful and tedious job (he'd had stints working in a factory and as a seasonal agriculture worker in Norway). History looked good.

He's pretty well steeped in it. Even his private e-mail address remembers the past: structured around the name of French general Robert Nivelle, a hero of Verdun, who in 1917 asked his troops for one more sacrifice "to honour France".

Lined up in their thousands, they turned their backs on him and began bleating.