A bird in the bush is worth many more 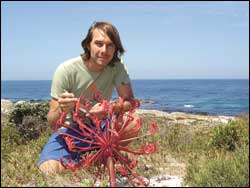 Yes, sure, everyone knows that the birds and the bees have been doing it for, well, forever.

But humans better make sure these birds and bees stick around to keep doing it, says UCT graduate Dr Anton Pauw in his 2004 doctoral thesis, Variation in Pollination Across a Fragmented Landscape at the Cape of Africa. This piece of work, completed at UCT under the supervision of Professor William Bond, pokes holes in a few scientific tenets and so impressed the South African Association of Botanists that the organisation awarded Pauw, now based at the University of Stellenbosch, its bronze medal for outstanding doctoral research at its January meeting.

In his study on two local pollinators, the Nectarinia sunbirds and the plant-oil collecting bee Rediviva peringueyi, Pauw showed that a drop in the numbers of these two species bodes poorly for two groups of Cape plants, and biodiversity in general.

The sunbirds and bees are among the pollinators that have suffered most as the spread of humans around the Cape have chopped what was once a single biosphere into "islands" of small nature reserves. These areas - think Signal Hill and Rondevlei reserves as examples - are scattered too far and wide for the animals to make their way from one to any other.

With no Nectarinia sunbirds or R. peringueyi around to pollinate their flowers, Pauw found, the populations of Brunsvigia orientalis (a blood-red candelabra flower) and several oil-secreting orchid species, eg Pterygodium catholicum, are declining. That could spell the demise of these plant species.

This kind of hand-in-glove partnership between plants and animals, known as mutualism, has too long been sniffed at, says Pauw. Conventional scientific wisdom has it that the plants would, sans pollinator, make do and find some other way to be pollinated. But, as with the flora in his case study and possibly many others, that may not always be the case.

A little bird and bee are telling us something.