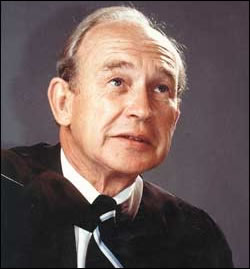 Prof Rossall Sealy passed away on January 9, 2006, after a long illness, bravely born. Our thoughts and sympathies are with his beloved wife, Libby, and his children Judith, Nicholas and Victoria. He was immensely proud of them all.

Sealy was educated in England and obtained an MA at Cambridge. He completed his medical degree at the University of Cape Town where he subsequently specialised and practiced as a radiation oncologist. he became the head of department in 1964 and was appointed the first Nellie Atkinson Professor in 1982. he retired in 1987 and was head of radiation oncology in Liverpool for five years before returning to Cape Town.

His professional legacy is that of a pioneer and founding father in the field.

Sealy's dedication to patient care was tireless and his first priority. His clinics were large, but if a patient did not understand what was happening, he would patiently spend as long as was needed to explain to the patient the appropriate treatment. he was gentle to his patients and showed respect and kindness to all. at his clinics, the well off and the less well off were seen without favour or discrimination. He extended cancer services to Port Elizabeth and East London, where he founded new departments and visited them fortnightly. his reward was a job well done.

Sealy's clinical practice was characterised by rigor and independent thought. For example, it was the uniform practice for radiation oncologists to decide where to position their radiation beams and then to look at how the dose of radiation was distributed around the tumour. From the very beginning, he followed the policy of determining what the tumour anatomy was, and then determining how to best position the radiation beams - a principle that was implemented by others many years later.

His research was innovative and broad. he was interested in the resistance induced in tumours by their poor oxygenation and this led him into studies of radiosensitisers, hyperbaric oxygen, hypothermia and induced anaemia. He was a world leader in the role of radiation in treating eye tumours, particularly the use of radioactive isotopes around the eye. Sealy pioneered the use of low-energy isotopes, which enabled sensitive structures to be protected. He also led the way in obtaining objective knowledge through clinical trials and studies. he was involved in setting these up in South Africa and collaborating globally.

He was also instrumental in founding the National Accelerator Centre (now called iThemba Lab) in the Western Cape as a centre for isotope production, nuclear physics and the treatment of tumours with neutrons and protons.

He led by example. he mentored and influenced the lives of many colleagues. he was always fully supportive of his staff and those he trained. He told them never to try filling someone else's shoes - fill your own. He showed that if something was not correct, you did not bypass it. You started again until you could do it to the best of your ability, irrespective of the cost in terms of time or effort.

He fostered the practice of oncology at Groote Schuur hospital through combined multidisciplinary clinics. He co-operated with other departments and institutions worldwide. he understood the importance of relationships with others and summed this up as: "It must always be two - ways".

He had vision, energy and resilient personal qualities. he had a strong personal presence so that he could give direction and command while reclining in a chair, peering with blue eyes over his glasses, perched halfway down his nose, and talking in soft, beautifully modulated tones. he could walk into any gathering - an international congress or a local clinic, and immediately give the impression that he was the centre of proceedings. Yet he was immensely humble and did not seek personal privilege or advantage. he had a taste for the unpretentious aspects of life - a fish braai on the beach, walking on the mountain, tramping around in his garden and africana.

We are saddened by his passing. Yet our memory of him and his teachings are vivid and vitalising. when we heard of his passing, a group of us in the department who had worked with him met over lunch the next day and talked of our experiences and exchanged stories. we had much to talk about. he has left us a great legacy and it will be passed on to those who will be caring for patients in the future and seeking the well being of our community.