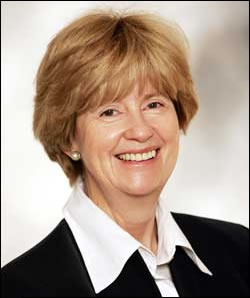 UCT welcomes two new deans, both women, tilting the gender balance towards the black. They're also both long servers; Prof Kathy Driver with 35 years at Wits and Prof Marian Jacobs with 40 years at UCT.

It's O week and new dean of science Professor Kathy Driver has been running between students, parents and functions.

Drilling downstairs rattles her office windows, grimy from southeaster. Welcome to Cape Town. At her desk on she'd hoped for a slower start.

"It's been fast, furious, energetic," the former head of mathematics at Wits says.

Two things stand out in her abridged CV: the marathon 35 years' service at Wits (tick committed) and an academic record marked by early and late achievements: matric at 16, a BSc by 19 and a PhD in 1991 (tick determined), following long semesters of motherhood and academic teaching.

Driver jokes about the single-mindedness of mathematicians. It's a beguiling field, full of discovery.

"There's beauty in the feeling when you think you've proved something new. I normally don't check [my calculations] immediately. I wait a few hours, just to savour the feeling."

One might expect less enthusiasm for administrative demands. But she reaches for the positive: the challenges of strategic management and policy making.

"I don't see it as administration but as managing and facilitating. It's a great challenge to provide the appropriate support to drive initiatives forward."

The research-led, internationally renowned faculty is an ideal foundation on which to build towards her vision of a vibrant, sustainable and diverse unit. Quality research and success within the NRF rating and funding system is essential to underpin growth in postgraduate and postdoctoral numbers.

On the flipside are the challenges:attracting black and female scientists (and potential scientists), funding, funding and funding.

Research is a recurring point of discussion. Driver believes UCT should be at the forefront in identifying research thrusts that will compete successfully in the national drive to promote innovation and excellence.

"The role of UCT as a national asset is critical for the success of Africa's economy in a world that is increasingly dependent on scientific and technological skills," she penned in her vision.

Beyond the campus it's hard to ignore the grassroots education problems, magnified nationally. How to "up" maths competency, the cornerstone of science, among young South Africans when the system doesn't attract good maths teachers?

"We're not making enough progress. and it's a battle we have to win."

Nonetheless, Driver is heartened by the education minister's understanding that special intervention is needed in nurturing competent maths and science teachers.

A lifelong maths educator, she's sympathetic. She has been at the coal face, a volunteer maths teacher in the community, including Leeukop prison in earlier years, which ironically offered a sanctuary to pupils from a strife-torn township.

The formal talk turns. what doesn't appear on her CV? The mother of two daughters, Jacquie (28) is an attorney in Johannesburg and Penny (22) is doing her maths PhD in the US, Driver is keen on sport. hold two older brothers to account for that. She was a South African junior tennis player and played bridge for South Africa. her husband, Gordon, captained the SA bridge team.

For now, Driver is enjoying the "buzz" in the faculty, the privilege of becoming intimately involved in "grand projects" in other fields; outside the discipline of maths, a "wonderful opportunity" to step outside her subject area.

Deanship gives her a chance to run in all the lanes. 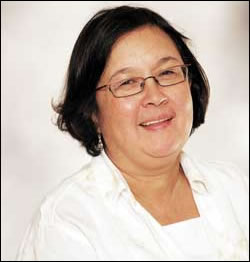 This month, 40 years ago, Marian Jacobs registered at UCT. She'd wanted to become a nursery school teacher. Instead, she graduated as a paediatrician. as director of the School of child and adolescent health and the children's Institute, and with appointments to national and global health bodies in her field, she became far better able to intervene in matters affecting children.

She remembers but doesn't dwell on apartheid humiliations of being an undergraduate medical student at UCT: not being allowed to dissect cadavers that were white or male. waiting at the door of the black ward for professors to complete their rounds with white students in white wards.

With her appointment as dean, she's come full circle at UCT - from her undergraduate days through appointments in paediatrics and public health, back to welcoming new students in health sciences. an immersion of four decades has given her a clear view of the faculty and the challenges ahead.

The big one is money. Funding affects every sphere and will either limit or lift her capacity to "lead the faculty into the future".

Lauding her team, Jacobs's description of her faculty colleagues is openly admiring. They include top scientists, teachers, administrators, public health and clinical practitioners and the "full set" of sub-specialists in health, "one for every organ".

Many are "grey hairs" and she's aware how urgently the faculty needs to develop succession plans, training the next generation of leaders.

Transformation is another big ticket. In her early days at UCT you could fit the black students onto Freedom Square, a patch of grass below the Jammie Steps.

Jacobs is heartened at progress. In her address to new students this year, she said she was struck by one thing in particular.

"I saw dignity. Those who used to be in the shadows, in the back rows, are now up front. They're proud. Confident."

She's proud that the faculty has an international reputation, and has also kept pace with national policy imperatives from the departments of education, health, and science and technology.

"The university's renewed interest in our social responsiveness mandate provides an opportunity for doing even more."

Talk turns to the perceived diaspora of young medical graduates. Some say it's the hospitals; full from AIDS with its 100% death rate. Jacobs disagrees that they are all running from the realities of this country.

"It's just one facet of globalisation. across the world, students seek experiences in different countries, and the number of young foreign graduates who apply to our health care institutions is testimony to this."

On engagement with health priorities she said: "we prepare students to deal with realities by teaching them in diverse settings, including communities. we teach them about the real world, how to think critically, how to problem solve. Not just how to heal."

Bravely, Jacobs will ask to be added to the faculty's list of inaugural lectures (that must be a first). She wants to make a public statement that holds her accountable in a job with a vital interface between the university, the health department and society at large.

Her daughter is a fresher at UCT, and off duty Jacobs enjoys walking her dogs and reading. her taste in music is eclectic -from classics to hip hop and she's thinking of learning salsa dancing.

It's all about balance.