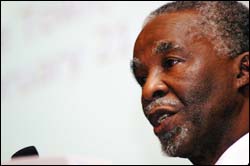 Highlights: President Thabo Mbeki took time out from his busy schedule to deliver a powerful call to arms to academics at the AAU conference.

The African intelligentsia should take the lead in informing the changes sweeping the continent.

This was the message President Thabo Mbeki brought to a polyglot gathering of close to 400 academics from 47 countries in Africa, Europe, Asia, Australia and the United States at the 11th General Conference of the Association of African Universities (AAU).

UCT was the official host for the conference, which takes place every four years and which met in South Africa for the first time last week. The theme was Cross-border Provision and the Future of Higher Education in Africa.

The president's address was also attended by Minister of Education Naledi Pandor who introduced the South African president to delegates as a man known for his efforts for peace and revitalising the African continent.

Vice-Chancellor Professor Njabulo Ndebele welcomed the delegates at the opening of the conference, and at a reception in Jameson Hall last Monday. He described it as historically significant for UCT and South Africa.

"I hope that this conference will do much to address collaborations within higher education and thereby contribute towards the realisation of the Nepad vision," he said.

In a pithy and challenging speech at a special session of the conference, Mbeki said the meeting was an "important gathering of the leaders of Africa's continental academy, representing African intelligentsia".

"You meet in our country at the beginning of the first century of the second millennium. The way the human mind works dictates that we impose on you the obligation to consider yourselves as the architects of a new African world that will be different from the African world of the last century and the greater part of the last millennium," he said.

Acknowledging that the 1970s and 1980s had been "difficult days" for the African intelligentsia when the "inquiring voice was read as a voice of the enemy", he said political changes on the continent could never be complete without the full involvement of African universities.

He warned against the colonial trap of "educated natives", estranged from their roots. Instead, he sketched a role for the African intelligentsia engaging deeply with continental issues, not only in helping to put out the proverbial fires, but providing an understanding of the underlying causes of those fires.

"Part of what we have to do is to rediscover our own identity. To ask the question: what is an African university; what is its purpose? And how does it relate to the millions of Africans who are poor and who have a particular image of themselves? What do we teach? What do we research?" he challenged.

Formed in 1967 by 34 African universities at a meeting in Rabat, Morocco, the AAU today has a membership of 179 higher education institutions, mostly universities, in 44 African countries.