The complex nature of stigma 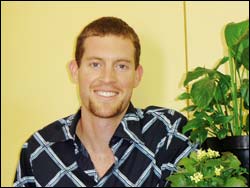 Coming to grips with the complex and ever-changing expression of stigma in relation to HIV/AIDS is needed to stop the spread of HIV.

It is towards a better understanding of stigma - leading to more effective anti-stigma interventions - that prospective PhD student Brendan Maughan Brown's research focuses on.

Critical to Maughan Brown's research is its conceptualisation of stigma as a multi-dimensional social process dependent on particular cultural and environmental contexts.

His research is therefore focused on measuring stigma and possible determinants of stigma within a specific region, namely the Cape Town Metropolitan area.

The research instrument is structured to include indices, which are able to measure the variable nature of HIV/AIDS stigma and its different dimensions, and includes regression models designed to assess potential determinants of the different types of stigma.

In this way, Maughan Brown aims to challenge surveys that have suggested that HIV/AIDS stigma has diminished substantially over time both in South Africa and worldwide. He is supervised by Professor Nicoli Natrass.

Maughan Brown's research is contextualised by a recognition of HIV/Aids as a major global challenge involving not only the primary and secondary infections themselves, but also the accompanying spread of "fear, stigmatisation, discrimination, blame and collective denial".

It is this intertwined third "epidemic" which makes it so difficult to combat the first two.

According to UNAIDS, the 'stigma epidemic' has not been ameliorated with time. Rather, it was placed first on a list of "the five most pressing items" on its agenda for the world community by UNAIDS in December 2000.

More recently, HIV- and AIDS-related stigma was chosen as the theme for the 2002/2003 World AIDS Campaign. Combating stigma is thus universally recognised as a key ingredient of the broader struggle against AIDS.

Based in the Aids and Society Research Unit (ASRU) at UCT's Centre for Social Science Research (CSSR) and the Department of Economics, Maughan Brown derives his data from the Cape Area Panel Study (CAPS).

CAPS is a longitudinal study being undertaken by the CSSR in which almost young people between the ages of 14 and 22 will be interviewed and re-interviewed at different times, over a period of at least seven years.

It is being undertaken by CSSR in collaboration with the University of Michigan's Institute for Social Research, and involves a large, multi-disciplinary research team including educationalists, social psychologists, economists, social anthropologists, sociologists and demographers.

While tracking the lives of Cape Town teenagers as they undergo the multiple transitions from adolescence to adulthood, CAPS also hopes to throw light on the challenges facing homes, families and neighbourhoods in the post-apartheid environment, including aspects such as employment, education, crime and violence, and HIV/AIDS.

It is within this longitudinal, multi-dimensional study that Maughan Brown situates his particular work on HIV/AIDS and stigma.

Underpinning his research is a view of "stigmatisation as a dynamic social process", involving first the identification of someone as having HIV/AIDS; second, the assignment of HIV/AIDS stigma to that person and the assigning of difference to that person and others in the community; and third, the development of a response to the person in question.

Behavioural intentions are seen as one dimension of stigma, while three other dimensions probe attitudinal responses to people living with HIV/AIDS based on the psychological functions they perform.

The first of these, symbolic stigma, is identified as a negative assessment of character based on a concern about what HIV/AIDS symbolises. It stems from judgements about perceived immoral or irresponsible behaviours and from associations with already disliked groups. This form of stigma potentially stems from stigmatising individuals needing to protect themselves from fear and anxiety.

The second, instrumental stigma or negative attitudes and behaviours resulting from fears that infection would arise from interaction with people living with HIV/AIDS, also arises from a psychological need to protect oneself.

Resource-based stigma, the third dimension, in which stigma takes the form of resentment at the allocation of limited resources to people living with HIV/AIDS, is linked to symbolic stigma as stigmatising individuals make sense of their economic predicament by blaming others.

Other variables such as household income, knowledge about HIV/AIDS, "racial prejudice", "bigotry" and the presence of social problems within the household are also measured.

What this investigation reveals is that while high levels of stigma are not widespread among individuals, the vast majority of the population in the age range researched show some tendency to stigmatise.

This widespread incidence of low levels of stigmatising attitudes in the population has important consequences for public health planners. It also has implications for people living with HIV/AIDS, for whom the experience of any degree of stigma, or the perception that this would be a reality if one disclosed one's status, could motivate people to hide the disease and hinder public health interventions.

The study also shows that while expressions of negative judgement (symbolic stigma), and fear of HIV infection (instrumental stigma) are more prevalent than negative behavioural intentions towards people living with HIV/AIDS, the combination of both dimensions will negatively affect peoples' lives.

Both these dimensions reveal that not only direct discrimination calls for an immediate response to stigma. Imposed stigma, or discrimination by others, and self-imposed stigma, manifesting in the devaluation of oneself and a loss of self-confidence, need to be addressed for their equally dangerous potential to drive the disease underground.

Findings stress the importance of cultural and environmental influences in predicting stigmatising attitudes, suggesting that anti-HIV/AIDS stigma interventions could be tailored to some extent.

It was also found that levels of HIV-transmission knowledge was an important determinant of all dimensions of stigma across all population groups, highlighting the necessity of educational programmes in response to stigma.

Significantly, however, the study suggests that symbolic stigma, prejudice towards other groups, and family backgrounds characterised by social problems, are important in predicting stigmatising attitudes and behaviour.

This suggests that although HIV/AIDS education is necessary for stigma alleviation, it is by no means sufficient unless broader social inequalities are alleviated.

This working paper (#74) may be downloaded from the CSSR website.