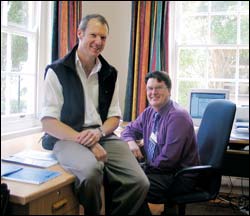 A grant of Â£2.2-million (R25-million) has been awarded to UCT's Professor Alan Flisher who will lead a research programme consortium to develop and implement mental health policies in Africa over the next five years (2005 to 2010).

The funding comes from the Department for International Development (DFID), the British government's department responsible for global development and the reduction of poverty.

Flisher, head of the Division of Child and Adolescent Psychiatry and director of the Adolescent Health Research Unit, will be joined by colleague Dr Crick Lund, who will coordinate the consortium's activities that target four countries: Ghana, Uganda, Zambia and South Africa.

A clinical psychologist, Lund has worked for the World Health Organisation (WHO) in the field for the past five years and has consulted to the Lesotho, Namibian and Indonesian governments on mental health policy and planning.

The DFID grant is significant on several fronts. The World Health Report 2001 says that mental disorders are growing worldwide. By 2020 unipolar depression will be the second leading cause of health disability in the world.

According to the World Health Report, 53% of African countries have no mental healthy policy and 84% spend less than 1% of their meagre health budgets on mental health.

Poor countries are also at greater risk due to a dearth of policies and interventions to deal with the affects of mental ill health.

It's also a sad fact that the HIV/AIDS pandemic has absorbed many of the continent's resources and taken centre stage on the health front.

The grant represents a coup for UCT. The consortium was the only South African group working in the field to receive DFID funding, beating out some stiff competition from proposed consortia led by prominent scholars in the United States and the United Kingdom.

It is also significant that the consortium is being lead from the developing world. The nine partners include WHO and academic institutions in the UK and the four country sites involved.

The grant also reflects a huge vote of confidence in the credentials of the South Africa/UCT-lead consortium.

During the five-year period of the grant the team will document strategies for the provision of mental health care to poor communities. Mental ill-health and poverty, Lund notes, interact in a negative cycle.

"Mental ill health impedes people's ability to learn and to become a productive part of their countries' economies. In turn, poverty increases the risk of developing mental disorders and reduces their access to health care."

The solution lies in national policies that provide multi-sectoral approaches to the problem. The team will thus analyse existing mental health policies in poor countries and provide plans to develop and implement these, evaluating the outcomes over the five-year period.

"The aim is to create new knowledge of comprehensive, multi-sectoral approaches to breaking the cycle of poverty and mental health," Flisher noted.

The programme also affords legion opportunities for capacity-building and research, with scope for PhD projects. And although this programme is confined to four African countries, there is clearly a spin off for other developing countries to "look and learn" from these experiences.