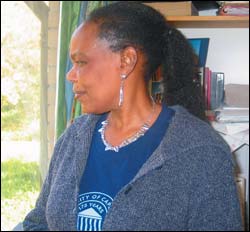 Tough job: Merab Kiremire, a recent associate with the African Gender Institute, whose study into human trafficking and prostitution in Zambia has revealed disturbing trends.

Forty-five of Africa's 54 countries are involved in human trafficking and South Africa is a major receiving and transit destination, says Merab Kambamu Kiremire, a recent associate at the African Gender Institute.

The trend has been researched in a report she is compiling on gender-based violence, prostitution and trafficking in Zambia, one she hopes will reveal the plight of the continent's most vulnerable people: young women and children.

Kiremire's research shows that out of 192 countries worldwide, 143 are involved in some form of human trafficking. According to the United States Department of State, the major recipients of Africans are the developed European countries. The United Nations estimates the figure for human trafficking at over four million.

Alarmingly, children are being trafficked not only for prostitution and labour, but also for their organs and skin, the latter used in witchcraft and for making magic charms.

"The [trafficking] trade is worth US$2-billion a year, a figure that rivals trade in small arms and drugs," says Kiremire.

Born in Uganda, Kiremire has lived and worked in Zambia for 27 years. Her parents were among the first African missionaries and she grew up "steeped" in women's unions and clubs.

Trafficking is a huge problem, she says, and no single effort can prevent it. In Africa prostitution is a hidden thing; reflecting the precarious place of its women, who need only put a foot wrong by becoming pregnant at school or being deserted by their husbands, to be rejected by their families and society.

"Without any group to support her, she will turn to her last saleable commodity," Kiremire explains. "Once prostitutes, these women lose their identities and take on assumed names. They cannot enter into written contracts for rentals. Their children are not registered and they don't appear on national statistics. They have no identities. They exist, but not officially."

Street prostitution is a fairly new phenomenon. The trade developed around the hotel industry in Zambia in about 1979, soon after the collapse of copper prices and the increase in oil prices on the world's markets.

Recent years have seen a dramatic rise in numbers of prostitutes on the streets of the main cities. These women are referred to as "hule", local dialect for an overused woman, one of no worth, cast out by society.

Prostitutes, some as young as 11, are being trafficked across borders. Kiremire is concerned that the little-researched problem is a growing one, especially in a country with 1.2-million people living with HIV/AIDS, eroding the traditional family social safety net. Urbanisation aggravates the problem as people move off the land and their sustaining farming activities. By 2003, 55% of Zambians lived in towns or cities.

In response, Kiremire founded Mapode (Movement of Community Action for the Prevention and Protection of Young People Against Poverty, Destitution, Diseases and Exploitation) in 1997, a community-based NGO that operates in Zambia and Uganda.

In mid-2002, Mapode began researching the trafficking of women and children for prostitution, labour and crime, in Zambia, revealing some complex problems.

She aims to share this report with a cross-section of stakeholders: government representatives, legislators and law enforcement agencies as well as members of civil society and child rights advocates.

Results confirmed what Kiremire had long suspected: prostitution and trafficking of young women and children is rife in the country. Of the 1 000 respondents in 15 towns and six border posts, 85% had either been involved or knew someone who was involved in this trade.

From Zambia they are trafficked by road, rail and air throughout Africa - South Africa included - Europe, Australia and the United States.

Attached to prostitution and trafficking are violence and sexual abuse. Eighty-nine per cent of those surveyed said they had been raped, assaulted or harassed.

Many of the children - disappearances are common - are put to work in other countries crushing stones for building material, as farm labourers or domestic workers, or as drug couriers.

The research team met two 15- and 17 year-old girls who said an Australian tourism operator had tried to persuade them to travel to Australia as dancing queens to "promote tourism between Australia and Zambia".

"That such young people should live with such expressed anger, aggression and misery and regret must surely be something society has to pose and contemplate and take seriously," says Kiremire.

In a more sinister turn, the researchers found many of the prostitutes they interviewed also carried strange skin markings. The skin seemed to have been burnt off their bodies, including their scalps.

"It wasn't until the Northern Province research team returned with stories of skin trafficking that this observation made sense," said Kiremire. "The girls, mostly foreigners, said they are injected with chemicals after which the skin begins to lift off the body, like in burns. It is then pulled off. They are paid."

The research shows clearly that poverty is the root cause of prostitution and trafficking.

"In 1987, the year some of this research's respondents were born, Zambia dropped from the World Bank's middle-income countries to the world's poorest 15 countries," Kiremire explained.

The late 1980s and 1990s were characterised by a mass exodus of Zambia's skilled manpower, assumed to comprise 9 000 (75%) of its 12 000 graduates produced under accelerated educational programmes of the post-independence era. Of Zambia's population of 10.3-million, 86% lives below the poverty line and 50% are unemployed.

Sixty-four per cent of the prostitutes interviewed in Kiremire's study said poverty had driven them to the streets. Among the children orphanhood was the main cause - 34.7% of the children interviewed were single or double orphans.

But the most sobering statistic belongs to the country's children. According to Kiremire's research, 1.8-million Zambian children are described as "increasingly vulnerable".

"Despite positive achievements that have made the past two decades of struggle against the social, economic and political marginalisation of women and children, there still remain deep-rooted and widespread discriminatory tendencies and practices that make them more susceptible to vulnerability and exploitation," she wrote in her report.

These facets are exacerbated by the lobola system. "It increases female vulnerability to abuse and violence, as husbands and their families believe the wife is, in many ways, one of their possessions since they paid her people to marry her."

An open letter by the Southern African Campaign Against Child Abuse and Trafficking (SACO) to African heads of state during the last African Union Summit in Maputo in 2003, brought some attention to the plight of women and children.

"It is part of the wider human trafficking, believed to be the 21st century's most lucrative trade, overriding even the small arms trade, which dominated the 20th century."

And even though the Zambian law protects the rights of children and women, those involved enjoy little legal protection. This is only aggravated by the fact that public awareness, both at community and national levels, is insufficient.