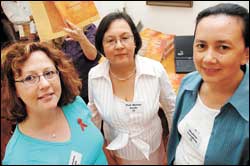 South Africa needs a comprehensive response to children infected and affected by HIV/AIDS, one of the main impediments to the realisation of children's rights.

This was the message from UCT's Children's Institute (CI), at the launch of a new publication, the South African Child Gauge 2005, on World AIDS Day on December 1.

The new publication is aimed at providing an annual reminder of the challenges that South Africa still faces in promoting and protecting child rights. This year's issue focused on HIV/AIDS. Every year, the gauge will present an analysis of legislative and policy developments related to children's rights, qualitative essays on a themed topic, and child-centred data on the realisation of children's socio-economic rights.

At the launch, Children's Institute director Professor Marian Jacobs cited Medical Research Council (MRC) research indicating that 40% of deaths of children under the age of five years are directly attributable to HIV/AIDS.

This means that HIV/AIDS is the leading cause of deaths among children under-five years of age - nationally and across all provinces - primarily due to HIV transmission before and during the birth process. At the same time, diseases of poverty account for at least 30% of all under-five child deaths.

According to the gauge, the second major obstacle to the realisation of child rights is the ongoing income inequality and widespread poverty in the country. Recent figures show that almost 12-million children (66% of the child population) are living in poverty.

Jacobs said the fact that the unemployment rate was rising alongside the HIV infection rate was of great concern because poverty deepens the effects of HIV/AIDS on households, while the disease in turn aggravates existing poverty.

The institute's deputy director, Dr Maylene Shung-King, who co-authored a discussion paper on where children fit in the government's plan for the care, management and treatment of HIV/AIDS, said the first priority - and the most significant response - was the prevention of childhood HIV infection.

The institute's analysis of the government's plan on the care, management and treatment of HIV/AIDS indicated that it did not adequately address two key interventions - reducing HIV infection in adults and the prevention of mother-to-child transmission. Both these interventions would have the greatest effect on reducing HIV in children.

Other issues related to children and HIV/AIDS highlighted in the text were the need for appropriate social security to children affected by HIV/AIDS; the use of schools as nodes of care and support to identify and support children most in need; and the importance of children's participation in decisions that affect their lives, particularly in the context of poverty and HIV/AIDS.

The South African Child Gauge can be dowloaded at: http://web.uct.ac.za/depts/ci/.