Any doctors in the house? 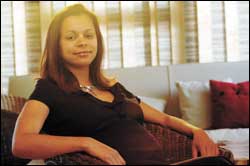 Every degree and diploma and certificate handed to a student at next week's graduation is an achievement. But, it must be said that the red-cloaked doctoral graduands are the pride and joy of any university. There is no higher degree on offer, which is why they get the front-row seats. About 90 doctoral candidates were lined up - there could be last-minute hiccups - to be capped at next week's ceremonies. Here we showcase a sample from this group just to show off how our up-and-coming researchers are pushing the boundaries of knowledge.

Floretta Boonzaier(psychology): Floretta Boonzaier's thesis reports on how women and men in intimate heterosexual relationships attribute meaning to the man's perpetration of violence against a woman partner. Her study involved in-depth interviews with couples whose relationships had been characterised by violence. Narrative analytical methods revealed that individuals drew on cultural resources of gender, subjectivity and relationships in order to render their experiences coherent. According to Boonzaier, culturally available forms of femininity and masculinity within the South African context may either provide support for or reduce men's violence against intimate woman partners. She also found that couples' narratives about their relationships and the violence were either constructed collaboratively or incongruently. Boonzaier argues that a particular type of violent couple may benefit from an inter-relational approach to intervention, and she provides insight into the potential for intervention with violent couples and some new directions for woman abuse research.

Jairos Kangira (rhetoric studies): Talk may come cheap to politicians, but it could change the course of a nation. That according to the thesis of Jairos Kangira on the rhetoric of the 2002 Zimbabwean presidential election, in particular that of main contenders president Robert Mugabe and challenger Morgan Tsvangirai of the opposition Movement for Democratic Change (MDC). The study shows that through the use of rhetorical techniques such as negative advertising, funeral oratory, collective memory and nostalgia, among others, the two candidates induced political cynicism of each other during the election, considered to be the most controversial since independence in 1980. Mugabe's rhetoric centred on the issue of sovereignty, bolstered by his land reform programme, while Tsvangirai made use of the rhetoric of change or progressive rhetoric. The study argues that Tsvangirai's rhetoric of change was so appealing to voters that, had the electoral process been democratic, he could have easily won the election.

Marilize le Roes (molecular and cell biology): Like many other bugs, Mycobacterium tuberculosis, the nasty bacterium that causes tuberculosis (TB), is building up resistance to drugs. That has prompted a global scurry for alternatives. At UCT, Marilize le Roes is exploring the potential of actinomycete bacteria - found in a range of natural environments, like the ground - to produce novel anti-tubercular antibiotics. Areas of great biodiversity are believed to harbour many new species of actinomycetes. For her work, Le Roes isolated actinomycetes from soil samples taken from South Africa's own biodiverse regions, unearthing several unknown species. In tests, she found that 19 of these actinomycetes produced anti-tubercular agents. One of these molecules was characterised in detail, and may be investigated further as a new anti-TB agent. 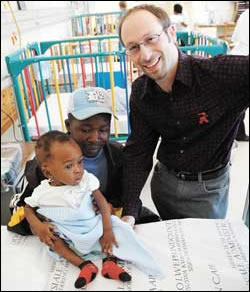 Dr Michael Levin (linguistics): UCT medical graduate and paediatrician Michael Levin swapped medicine for linguistics for his work on the miscommunication between English-speaking doctors and Xhosa-speaking parents at a local paediatric hospital. The central problem for Levin, who speaks isiXhosa, is the not-so-ideal communication between largely English-speaking doctors and largely Xhosa-speaking patients, each with only a shaky command of the other's language. In his thesis, he documents the misunderstandings among even fluent second-language speakers arising out of what he calls 'discordant terminology' in the two languages. "In the course of my work I noticed that the words that doctors and patients used are understood differently by the two groups," he says. Essentially the problem involves loose translations of English medical terms into isiXhosa, which undergo significant semantic shift. For example, ifiva, borrowed from the English word "fever", does not mean the same thing in the two languages. "That, I think, is the result of the different cultural models of disease," says Levin. 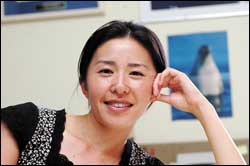 Mitsuyo Mori (mathematics and applied mathematics): The oceans surrounding Antarctica abound in marine and animal life. But the no-holds-barred harvesting of whales and seals in the early 20th century makes the region an ideal study case to see just what impact that free-for-all had on its ecosystem. In her study, Japanese student Mitsuyo Mori wanted to determine if a model based on predator-prey interactions can, without looking at environmental factors, explain population trends of some of the species in these waters. Mori's prey were krill (plankton consumed by many Antarctic animals), her predators six species of whales and seals that feed heavily on krill. Mori found that, yes, her predator-prey model does account for the current abundance and trend estimates of baleen whale and seal populations, but only with some difficulty. Some more numbers have to be generated, she says, especially around the consumption of krill by other predators such as seabirds, fish and squid. Other species also occupied Mori while she's been at UCT. She co-developed an approach, on behalf of the Commission for the Conservation of Southern Bluefin Tuna, for setting levels for the international catching of this fish, beating out competing models from Australian, Japanese and Taiwanese scientists. That, says Professor Doug Butterworth, is a major step in securing international agreement on how to manage one of the world's most controversial fisheries.

Rehama Nchimbi (historical studies): Rehama Nchimbi found the inspiration for her doctoral work, titled Women's Beauty in the History of Tanzania, in the study and 1980s book of American scholar Sylvia Boone on notions of female beauty among the Mende people of Sierra Leone. In her own work, Nchimbi traces the changing concepts of female beauty in the history of Tanzania. She explores the role body language, culturally accepted codes of behaviour, dress and other fashion accessories have played (and continue to play) in the self-image of Tanzanian women, and in the ways others see them. Exploring a broad terrain that stretches from the 'pre-colonial' values that are still upheld by some of Tanzania's rural communities to the contemporary beauty pageants held in cosmopolitan Dar es Salaam, Nchimbi identifies defining moments and key concepts relevant to understanding the inventive ways in which Tanzanian notions of female beauty were formed and sustained, but also transformed over time. 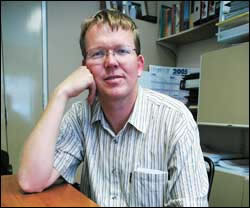 CornÃ© van Walbeek (economics): Hats off to the ministries of health and finance. According to the thesis of CornÃ© van Walbeek, the state's measures to reduce the consumption of cigarettes - price hikes, advertising restrictions, etc - has paid off. During the past decade, says Van Walbeek, cigarette consumption has decreased by a whopping 33%, as especially males, the youth and the poor begin to kick the habit. Not that the tobacco industry is going to go up in smoke anytime soon. It has, as a matter of fact, boosted its revenues and profits by raising its net-of-tax retail price (the price before tax). But there is some more good news. Van Walbeek found that cigarette taxes were, as expected, found to be regressive, hitting the wallets of the poor hardest because it eats up a larger chunk of their income. However, since the poor have cut back on their smoking, the tax has become less regressive as a result.

Rochelle Wigley (marine geology): For as long as anyone can remember, UCT has just not been producing any women doctors of marine geology. But the university could be witnessing the modest beginnings of a revolution. Next week, the Department of Geological Sciences caps the third woman to have completed a doctorate in marine geology in recent years. Rochelle Wigley, who now completes the triumvirate, follows in the wake of Dr Amanda Rau and Dr Giuliana Franceschini. "It's a sea change," observes Assoc Prof John Compton, Wigley's supervisor. In her study, Wigley reconstructed the geological history of the continental margin of the most southerly west-coast diamond concession, located off Saldanha Bay at the head of the submarine Cape Canyon. The thesis represents a major advancement in the understanding of the region's geological past, demonstrating how major tectonic and paleoceanographic events during the last 100-million years influenced the development of the continental margin.