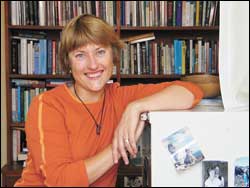 P-ratings are given to young researchers (normally under 35 years of age) who have held doctorates or equivalent qualifications for less than five years and who have demonstrated exceptional potential in their fields.

In addition, the university is celebrating one new A-rating, and an upgrading for an existing A-rated researcher, the highest accolade from the NRF.

De la Rey said: "I'm extremely delighted. For some time we have been concerned about the next generation of top researchers at UCT as the current A generation retires from our system. The fact that we have increased our Ps by three in one year means we have reason to be far more optimistic.

"I'm especially delighted that they are three women, two of whom managed to achieve this rank of excellence together with their responsibilities as mothers."

The new P-rated women are:

Associate Professor Fiona Ross (social anthropology), whose expertise is in the area of ethnographic enquiry and research around domesticity and housing, as well as representations of political activism with a focus on gender issues. Her recent book, Bearing Witness: Women and the Truth and Reconciliation Commission in South Africa (2003. Pluto Press, London), is a study of women's testimonies and political activism in the light of issues raised by the TRC. Ross said: "I'm really excited about the rating and grateful for the wonderful support from my husband, colleagues and research participants." 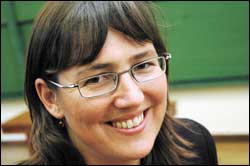 Dr Eva PlagÃ¡nyi (mathematic and applied mathematics), who completed her PhD study in 2004, focusing on developing a mathematical model of the abalone resource. She also assessed the possibilities of extending the single-species model to include multi-species effects and evaluated the potential of a range of multi-species approaches that could contribute to practical management advice on marine resources. With two daughters, aged four and seven, her comment on the news was: "I am overwhelmed, honoured and surprised. In my letter to the NRF president I said it was a small victory for women such as myself, trying to juggle motherhood and career. I would hope to encourage other women not to give up on that front." 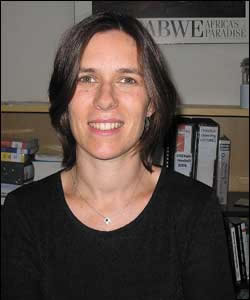 Dr Jenni Case (chemical engineering), who concentrates on improving the quality of student learning in tertiary science and engineering programmes, particularly in the context of the chemical engineering undergraduate programme at UCT where she is educational development officer in the department. Her current work shows how together these offer a productive methodology for undertaking this research, and also yield important findings that inform teaching practice. Case has just returned to work after maternity leave. "I would like to pay tribute to the UCT community, in particular my department and the Centre for Research and Engineering Education. My colleagues have been enormously supportive, inspiring and nurturing. And, of course, my husband, Roger Wallace, has too," she said.

Also announced by the NRF was the A-rating of Professor Pragesan Pillay (electrical engineering) who is a joint professor at UCT and Clarkson University, New York. Pillay has performed significant pioneering work in the design and understanding of switched reluctance (SR) and permanent magnet (PM) motor drives.

Dean of Humanities, Professor Paula Ensor, expressed her happiness with the news, saying: "I'm absolutely delighted. It's a first for the humanities faculty. We've got A-rated, Bs and Cs but this is our first P. We hope that we will be able to announce in a few years time that Assoc Prof Ross has become an A-rate scholar. Not only is she an outstanding researcher but she is also known in the faculty as an outstanding teacher."

Outgoing Dean of Science, Professor Daya Reddy, said: "The award of a P-rating to Eva PlagÃ¡nyi is a signal honour, and one which acknowledges most appropriately her outstanding achievements as a young researcher. The science faculty extends its warmest congratulations to her."

Dean of Engineering and the Built Environment, Professor Cyril O'Connor, whose faculty has two reasons for celebration, said Pillay's rating was an exciting development, given the excellent research initiatives gathering momentum in electrical engineering.

Turning to Case's P-rating, he said she had turned the study of education engineering into a seriously robust discipline.