Seaweed would smell as sweet 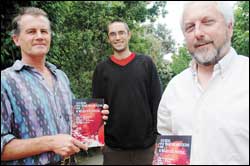 For many, seaweed, or marine algae, is more of a nuisance than a marvel. It's what the sea spits out to rot and turn smelly on the beach; it makes rocks lethal at low tide and it turns tranquil rock pools into places of potential ambush.

For phycologists, the people who study marine algae, seaweed offers far more beguiling vistas: the underwater forests that are ecosystems supporting myriad life forms; the basis of mariculture underpinning important industries like abalone farming; and even the nutritious wrap around sushi.

The humble seaweed offers scientists hopeful avenues for other ecologically-sound development. At an international seaweed meeting at UCT a few years ago, it was mooted that marine algae be explored as a natural alternative to polyurethane foam.

"With all the sushi restaurants around Cape Town, I was also hoping the idea that seaweeds are just smelly kelp was disappearing a little," said algal biologist Professor John Bolton (botany), UCT's major contributor to a new book, Guide to the Seaweeds of KwaZulu-Natal. It's a valuable database of marine algae found along our most prolific seaweed coast.

Bolton's co-author (a team of four multi-national authors produced the book, including Olivier de Clerck and Eric Coppejans) Dr Rob Anderson, of Marine and Coastal Management, is not impartial to a bite of black marine algae himself. This is nori, the black seaweed that is wrapped around rice balls and sushi. He's estimated that in Japan its annual trade is worth over US$1.5-billion, about three times the turnover of the entire South African fishing industry.

The book, a joint publication of the National Botanic Garden of Belguim, VLIZ: Flanders Marine Institute and the Flemish community, is testimony to a close working relationship with the University of Ghent in Belgium. Various sections were co-authored by postdoctoral fellows from UCT (Enrico Tronchin) and the University of Ghent.

It also represents the culmination of two projects funded by the NRF/Community of Flanders.

Why the focus on KwaZulu-Natal? A book on seaweeds of the South African West Coast already exists. The new volume fills a gap in the knowledge of the south and east coasts, KwaZulu-Natal in particular.

The province is the transition zone between the warm temperate coast of the Eastern Cape Province and the more tropical region of northern KwaZulu-Natal and Mozambique to the north.

So rich is the diversity that in one of the turfs (lawns of seaweed that offer substantial grazing to marine animals) the team found 104 marine algae species in 1.56sq m, representing 20% of the total recorded species in KZN.

The number of species makes up for their size; nothing grows really large in this region, not like the giant brown kelp (Macrocystis pyrifera), which grows in the temperate and sub-Antarctic seas, reaching lengths of more than 50m. The largest seaweeds around KwaZulu-Natal measure up to 1m and the smallest are the minute forms that grow on other seaweeds and marine animals.

Over six years of collection trips and scuba dives by a host of contributors went into the accumulation of algae species in this guidebook. Altogether 212 species have been depicted; 130 red algae (Rhodophyceae), 31 brown algae (Phaeophyceae) and 51 green algae (Chlorophyceae).

Collecting the material took some doing. Anderson recalls the nasty turn he had during one night dive. A very big grouper (they have enormous teeth) forced its way between his legs from behind to get at the fish attracted by his light.

Under the water, things were even more interesting. A fascinating phenomenon the seaweed collectors observed is iridescence.

"Some species lay down the material in the cell walls in such a way that some of the light shone on them is diffracted, particularly when they are underwater," Bolton explains. This makes the seaweed shine in an array of jewel colours.

"A remarkable attribute of this iridescence in seaweed is that often it stops abruptly when the seaweed is removed from the water."

The benefit to seaweeds of this iridescence has never been satisfactorily demonstrated, he says.

"It is certainly mostly confined to warmer waters. Many species contain unusual chemical compounds, some of which act to prevent or reduce grazing by animals. Grazing pressures, particularly by herbivore fish, are much greater in warmer waters, and it is possible that iridescence acts in some way to deter grazing. But this has not been proven."

But what really sets the guide apart are the pictures, a process revolutionised, Anderson says, by the advent of digital photography. Each species is shown in colour glorious, some with additional pictures depicting microscopic details.

Most of the species listed in the guide are common, some moderately common and other downright rare, such as the recently-discovered species Ptilophora coppejansii, P. leliaertii and Shepleya elixithamnion.

The guide also details early seaweed exploration along our coast, going back to the first half of the 19th century, beginning with German naturalists, and with a large contribution by the eminent phycologist GF Papenfuss and his students. Papenfuss was a South African whose work was based at the University of California, Berkeley.

The next time you go tramping along a Cape beach after a big sea, take time to examine the seaweed: unassuming source of energy, shelter and wonder.

Q: Why is there less seaweed in the deep?
A: Because light is a primary requirement for seaweed growth, thus seaweed communities tend to be better developed in shallow water. The deepest records (295m) are from clear, tropical water.

Q: Why are seaweeds reef or shore-based?
A: Most need to attach to a land substratum so need rock reefs, sand, or shells to cling to. The exception is the drifting beds of Sargassum in the Sargasso Sea, or the populations of drifting Ulva in nutrient-enriched embayments and harbours.

Q: Seaweeds offer grazing to a wide range of marine animals. How does nature protect marine algae?
A: Some have chemical grazer-deterrents, or hard, unpalatable tissues. They are also fast-growing and some even find shelter in refugia, ledges and crevasses and places that can't be easily reached.