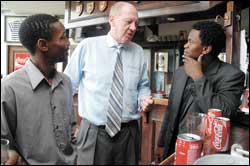 Neville Isdell's itinerary for his visit to UCT last week read much like that of any VIP who stops over here. As CEO of the Coca-Cola Company and former board member of the UCT Fund Inc, the university's fundraising arm in the US, Isdell sat down with Vice-Chancellor and Principal, Professor Njabulo S Ndebele. He also took a tour of campus with the VC. But his visit took a turn off the beaten path. Isdell, who completed a bachelor's degree in social science at UCT in 1966, spent quite some time at an old watering hole, the UCT Rugby Club. As a member of the 1965 Ikeys team, he would have whiled away many hours there. A few pictures of him - a team photo and another of him in action against Maties in the intervarsity - still grace the club walls. Isdell hasn't lost touch with the club since. As he told the likes of Club President Dugald MacDonald, chair of UCT Sports Council Prof John Simpson and a few of the team's new stars - while wetting their whistles with the world's favourite beverage - he still makes a point of catching the side's results on the Internet.

The Heritage Society brings together graduates and others who, for love of UCT, have made provision in their wills for the university. Each year, UCT hosts a small function in honour of the society, which incorporates the like-inclined Barnard Fuller Society of the Faculty of Health Sciences. The event lends UCT the opportunity to thank the graduates for their generosity and foresight. It also allows the university to show these donors that their money - and trust - is well invested. Last week, for example, the Department of Development and Alumni Affairs took society members on a tour to show off one of the newest jewels in the UCT crown, the Institute of Infectious Disease and Molecular Medicine (IIDMM). "It's important for the university to show its gratitude," says former vice-chancellor and society patron, Dr Stuart Saunders. "But it's also important to show people who have believed in the university in the past that there's still good reason for them to believe in its present and future." Going by the interest shown by members in the work of the IIDMM, that faith is still burning bright.