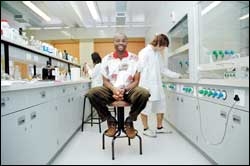 Sitting pretty: Assoc Prof Kelly Chibale and students in the lab that will soon host postdocs handpicked by the Tropical Diseases Research unit of the World Health Organisation.

The university should count the R14-million or so it invested in new synthetic-chemistry labs on upper campus as some of the smartest money it has spent this year.

The new-lab smell had hardly been sucked out by the vents (just as new) when Associate Professor Kelly Chibale, who supervises some 18 postgraduate and postdoctoral students from here, was notified by the Tropical Diseases Research (TDR) unit of the World Health Organisation (WHO) that his laboratory has been selected as one of its Synthetic/Medicinal Chemistry "Workstations".

Chibale's lab is the only African one - among a select handful from around the globe - to be singled out for the honour after a competitive round of international applications involving some big-name pharmaceutical companies and academic institutions.

There are two parts to the selection. Firstly, it means that Chibale will, as soon as the paperwork is wrapped up, host a number of TDR-funded international postdoctoral fellows.

There's an even bigger prize, though - a choice long-term plan by the WHO and TDR to partner with labs like Chibale's to run a strong drug-lead identification/optimisation programme.

The drug-discovery unit of the Special Programme for Research and Training in Tropical Diseases - a scientific collaboration to combat the major diseases that plague the world's poor, co-sponsored by the United Nations Children's Fund (UNICEF), the United Nations Development Programme (UNDP), the World Bank and WHO - has identified a number of potential drug-lead compounds. The molecular structure in these compounds can, in the hands of a skilled medicinal synthetic organic chemist like Chibale and his band of postdocs, be tweaked into disease-fighting drugs. The compounds are expected to form the basis of a chemistry-driven programme to identify candidate drugs for the TDR-targeted diseases - malaria, leishmaniasis, schistosomiasis, lymphatic filariasis and onchocerciasis, African trypanosomiasis and Chagas disease, leprosy, dengue and tuberculosis.

For now, Chibale's postdoctoral chemists will build synthetic molecules similar to the TDR lead compounds to understand the relationship between the chemical structure and biological activity (structure-activity relationship) and, finally, to see how they interact with the human body in future clinical trials.

There are many likely gains from the TDR selection, says Chibale. For one, it could breathe new life into the flagging postdoctoral culture among South African researchers. The WHO also hopes it will strengthen capacity in the field of medicinal synthetic organic chemistry in the country, pivotal for a continent beset by disease.

It is also, of course, a huge feather in UCT's cap. And that of Zambian-born Chibale, who cut his organic-chemistry teeth in some of the leading institutions in the UK and US but chose to forge a career in Africa.

"I'm of course extremely delighted to have received news of this prestigious award last month as this is a clear manifestation that my international stature, and that of my laboratory here at UCT, is being formally recognised and acknowledged at the highest and most respected levels internationally."

The TDR selection strikes a blow to the myth that institutions in Africa can't hold their own against their more-celebrated counterparts in the US and Europe, says Chibale.

"There's a lot of Afro-pessimism in this country. But I think this should convince any doubting Thomases that we can do good work here."

That's certainly worth a toast.

Assoc Prof Kelly Chibale is catching the eye of many in the science world. He has just been invited to join a proposed consortium for now mooted as the African Biotherapeutics Institute (ABIT). Rutgers, the State University of New Jersey in the US, has proposed to form a consortium with eight sub-Saharan African universities, the University of Illinois in the US, the Tropical Disease Research (TDR) unit of the World Health Organisation (WHO), and the International Organisation for Chemical Sciences in Development (IOCD). Through Chibale, UCT is the only South African institution identified by ABIT. It's hoped that ABIT will in time turn out health and wellness products from African plants and microorganisms.