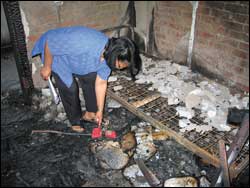 Charred: Residence administrator Katie van der Ventel looks through the remains of a room gutted by fire in Clarendon House, which meant moving an exam scheduled there to a new venue.

Prompt action by the well-drilled staff and residents of Clarendon House, the men's residence behind the Old Main Building of Groote Schuur Hospital, saw 80 students evacuated after a fire broke out there early on Friday, November 18.

One room was gutted by fire and others along the ground-floor corridor were damaged by heavy black smoke.

Prompt action was taken and the students in the residence were evacuated. As warden Neil Foster points out, fortunately most of their 264 students had gone home after completing exams.

The 22 other rooms in the corridor affected were sealed and the remaining residents moved to the third floor.

"The student whose room burnt, lost everything," Foster said.

With a background in pastoral care, and 11 years as a warden, Foster is used to dealing with such situations. He arranged both counselling for the student and an emergency loan to buy clothing.

"We run two night-time drills, when all the students are there; one in the first semester and one in the second semester. We also have a day drill. There are warning signs on the backs of all doors, telling students what to do, and where to assemble in the case of emergencies like fire."

Reminders are everywhere. The first sign up after the entrance at Clarendon reads: Don't get your first degree in burns.

(The medical students who'd been due to write an exam at Clarendon House that morning were quickly moved to another venue.)