A three-dimensional look at rural poverty 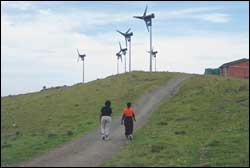 Power to the women: The wind turbines in Lucingweni may bring new opportunities to women in the Eastern Cape village.

Once lit by candles and oil lamps, the 220 homes in the village of Lucingweni in the Eastern Cape are more or less electrified these days. The village gets its precious few watts of power - when the system is switched on - from a pilot project of the Department of Minerals and Energy, a mini grid made up of a hybrid wind- and solar-power station set up nearby.

These mini-grid systems are seen as a way to ease the burden of rural poverty, particularly that of women who make up the lion's share of South Africa's rural population. But noble as the project is, it may still shortchange these women.

"Simply focusing on 'energy poverty,' instead of the ability of such services to make a qualitative difference to the lives of the rural poor, hampers development efforts," says Jocelyn Muller, a research officer at UCT's Energy Research Centre (ERC).

Rather, suggest Muller and others, attention should be paid to packaging access to energy with access to, for example, information and communication technology (ICT), be it cellphones, television or even the Internet. With that comes, on paper at least, a host of real empowerment opportunities - access to long-distance education, telemedicine, networking among women and entrepreneurial support, to name but a few.

But have the women been able to make use of these opportunities? A new study by Muller - taking a novel approach by throwing issues of gender, energy and ICT into the pot - plans to find out.

Over the next few months, Muller will interview women in Lucingweni to find out what they think of the limitations and potential of energy as a portal to ICTs, and whether or not it can make their lives the better. Muller thinks of these interviews as "a participatory research journey".

"By telling their life stories and reflecting on their lived experiences, they will express their perception of the effect that energy and certain ICTs have had on their lives," she says.

Muller's study is but one in a new initiative called the Gender Research in Africa into ICTs for Empowerment (GRACE). GRACE is a two-year project managed by the Association for Progressive Communications Women's Networking Programme (APC WNSP) and funded by the International Development Research Centre (IDRC). It brings together researchers from 12 African countries working from 14 sites like Lucingweni spread around these nations.

Organisers hope that GRACE will, in time, contribute to the debates on gender and ICTs, as well as national policies.

And in that way give women real power.