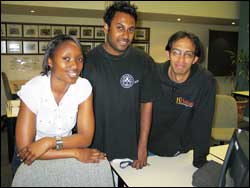 An information systems honours degree from UCT offers candidates many things: cutting-edge knowledge, the chances of landing a top job with all the allied accoutrements. Certainly not a stint in prison.

But that's what a group of honours students found when they embarked on the mandatory Honours Outreach Community Involvement Programme (HOCIP), an in-built community service module that is part of their degree.

The six taught the Youth Computer Literacy Programme in Pollsmoor Prison (Nelson Mandela was once incarcerated there) headed by the Association of Regional Magistrates of South Africa (ARMSA), in conjunction with a toast master association.

Every Saturday morning for two months they presented structured sessions to juveniles in the prison, under the banner of the Youth Offender Rehabilitation Programme, teaching them how to use computers, particularly, the MS Office suite. Their brief was to prepare their charges for the digital age, providing skills they can use when they rejoin society.

A computer laboratory with 22 machines was made available for their tutoring sessions, headed by project coordinator Mogen Naidoo. The students taught the Microsoft range of Word MS and Excel, and the basics of constructing a web page.

Student Liako Mokobori confesses it wasn't easy going into a prison. "I felt unsafe in a way, even though the warders were around and I also had my own discernments about them [the prisoners]." However, she soon felt at ease.

Not one of the students remained unchanged by the experience. Mokobori was humbled by the inmates' hunger to learn.

"The little that we were teaching these guys meant so much to them. At times I felt myself getting too emotionally involved, wishing that I could do more to help them."

The intimidation factor was one they all considered. Kunal Patel said he felt less threatened by the setup of a prison when he began thinking of the place as a classroom.

Teboho Wessie was initially sceptical but was later impressed by the enthusiasm. "Many of them had a willingness to learn –. The students I taught always wanted to know more than what was given in the lesson."

Important bonds were formed. One of Naidoo's students, who came top of the class, told him he would be the first person he will contact when he leaves prison.

The encounters changed the way these students viewed prisoners. Mokobori said: "A few said how they regretted the day they arrived at the prison and said they hoped to take the course further and turn their lives around."

She said the experience had forced her to "get out of my comfort zone". "It made me appreciate what I am and what I have achieved even more."

As their supervisor, project coordinator Professor Jean-Paul van Belle commented: "Most students go for the soft option - but you only get out what you put in."

The department has lauded the students and Van Belle has used the project as a case study for other interested institutions.

Last word to Mokobori: "None of us can exist in isolation. I believe that giving something to others as a citizen of the world is the greatest reward of all. For me, this was the greatest opportunity and if I had a chance to do it again I would."

This is an option Van Belle is keen to pursue - the possibility of making the Pollsmoor outreach project and annual sojourn into the heart of the prison - and the hearts of students.