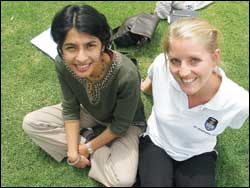 Occupational therapy student Tarryn Cawood and her supervisor Roshan Galvaan are achieving what they modestly describe as a "small, positive contribution" among a group of vulnerable youths; grade-six boys in Lavender Hill, a community beset by gangsterism, violence and substance abuse.

The Face Up programme has been running in Zerilda Park and Levana primary schools since 2000. Final-year students spend six to eight weeks on the project, using the work as a platform for therapy.

The boys run a recycling project, collecting newspaper, aluminium - any materials they can sell. The money goes into a kitty they can use to fund activities. The project is used to create opportunities, instilling vital life skills: responsibility, a sense of doing things for themselves, helping them break free of a cycle tied to life in a disadvantaged community.

The UCT team works from dedicated space at the schools (a container and two classrooms), space where they have been able to create "chill rooms", spaces the boys can come to unwind, play games, read magazines and talk. Less aggressive activities.

"Many of these boys have problems in the home environment and this behaviour manifests in school," Cawood said.

Recently, the boys were taken on two excursions; to Kirstenbosch to learn more about nature and ecosystems and the province's bountiful floral heritage; and to Koeberg, where they learnt about electricity and environmental safety issues.

Cawood and Galvaan were amazed at their responses, highlighting the stark differences between their usual, chaotic lived environments and risk activities, and the world beyond.

"It fitted in well with the aim of raising their awareness of how they could take control of shaping their individual identities," Galvaan said. "Overall, the two days were a microcosm of the students' work with the learners over the six weeks that they are placed at Facing Up."

Cawood reflects: "In the first six weeks you don't see any change at all. It's chaotic, challenging."

But gradually the students get the boys to think about the consequences negative behaviour elicits and how they can plan their lives differently.

In the end, absenteeism declines and the boys become part of a "can-do" group, many of whom return to the programme occasionally once they move to high school.

The community stint has convinced Cawood of the huge role for occupational therapists in South Africa.

"In the community setting, nothing is prescriptive. We're constantly developing learning; how to become involved. We're learning from the community."

"It's not about fixing," says Galvaan.

'It's about creating opportunities," Cawood adds.