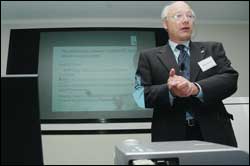 Progress towards the establishment of the continent's first Centre for High Performance Computing moved up a gear at the recent operational workshop in Rondebosch, coordinated by Professor Kevin Naidoo (computational chemistry).

In South Africa, fields like bioinformatics, computational chemistry, computational economics, urban and regional planning, mechanics and physics, climate modelling and even the much-publicised Square Kilometre Array proposal stand to benefit from the centre, the first of its kind in Africa.

The project to create such a facility has been "going awhile" in the science faculty (UCT has already invested R10-million in the CHPC), but its scope and potential recently shifted to a collaboration with sister institutions the University of the Western Cape the Cape Peninsula University of Technology.

In February this year, UCT and the Department of Science and Technology and the Council for Scientific and Industrial Research (CSIR) signed an agreement to launch the CHPC as a national facility, which UCT would host and oversee.

The development slots in well with other information technology initiatives at the CSIR: notably the Meraka Institute, launched in May this year. It is Africa's first advanced institute for information and communications technology. The institute's formation followed President Thabo Mbeki's call in 2002 for a national university for ICT.

The Meraka Insitute is regarded as a significant development in South Africa's ICT research, equipping people with top ICT skills. It will enhance research programmes in a variety of fields.

The CHPC forms the high-performance computing division of the Meraka Institute, a specialised node in a sense. In line with the government's vision, the centre will act as a platform for major scientific and technological developments, extending to social and economic spheres such as computational economics.

"Part of the centre's function will be to enable disciplines in need computational resources and expertise," Naidoo added.

The government, he said, is keen to develop South Africa's capacity in both human and technical resources, keeping the country in step with the ICT age, and so will be investing tens of millions of rands over the coming years to establish the CHPC.

"It is now recognised that computational science and engineering in the broad sense is a key component of any modern economy as it is a critical component of design whether it be in motor manufacturing or city planning," Naidoo said.

The 80 or so researchers at the workshop organised themselves into discipline-based consortia to begin to take advantage of this facility, fine-tuning projects that will tap into the vast computational computing potential available.

"We're looking to create a sustainable facility and not a once-off project whose machines and services the scientific community couldn't support," Naidoo said.

The centre is fast moving from the virtual to the real; architectural plans for the facility, which is to be built in Rosebank, are almost final. Building begins next year and the headquarters should be completed in 18 to 24 months.

It's a three-phase development plan: two years to set up the facility, three years of operational activity, setting up networks across the country (bandwidth will be a big issue); and three years of a full-scale operational cycle followed by a period of review.

Major IT companies such as INTEL, AMD, Hewlet Packard, SUN and IBM all sent their international HPC experts to attend the workshop. Naidoo says the centre will look to partnerships with large commercial companies so that vital technology transfer takes place in this area of advanced ICT.

There is nothing like it in Africa, a sobering thought considering India alone has three high performance computing centres.

The workshop also gave the local community an opportunity to learn from the experiences of the international advisory panel, including Professor Martyn Guest of the HPCx in the UK; Professor Radha Nandkumar of the National Centre for Supercomputing Applications in the US, Professor Andrew Pollard of the High Performance Computing Virtual Laboratory in Canada, Professor Marco Antonio Raupp and Professor Bruno Schulze, both from the national HPC facility (LNCC)in Brazil, and Professor Volker Lindenstruth of the University of Heidelberg in Germany.