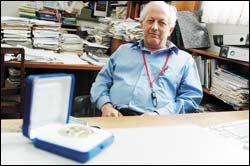 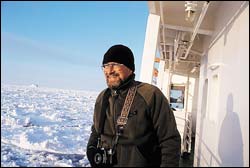 Pick of the bunch: Emeritus Professor George Ellis (top) of the Department of Mathematics and Professor Johann Lutjeharms have been laurelled with three awards between them from the Academy of Science of South Africa.

Talk about hogging the limelight.

It took just two UCT scientists - Emeritus Professor George Ellis of the Department of Mathematics and Applied Mathematics and Professor Johann Lutjeharms of the Department of Oceanography - to bag nearly half the awards on offer at the October AGM of the Academy of Science of South Africa (ASSAf). No mean feat this, as the academy is one of the most reputable in the country and boasts the cream of South African scientists among its fold.

"Being a member of the Academy of Science of South Africa is an honour in itself because members are selected on the basis of significant achievement in a wide range of disciplines," said Minister of Science and Technology Mosibudi Mangena, who presented the awards to all the winners on the night.

This year, ASSAf chose to commemorate the centenary of its official publication, the South African Journal of Science, by making four one-off awards to contributors in varied capacities. Lutjeharms, who wasn't able to make the ASSAf ceremony in Pretoria but was linked via telephone, picked up two - the first as the most published author in the history of the journal, and the second for having the most original articles used for the cover page.

"I think the journal plays an important role in South African science, not only in highlighting the good science that is done here, but also in maintaining high standards," he says. "I hope it encourages more South African scientists to publish some of their material locally. It gets as much exposure as some international journals."

Lutjeharms, an A-rated scientist, is considered among the world's leading physical oceanographers. His main area of interest is tracking the large-scale circulation patterns of the oceans adjacent to southern Africa and their influence on global weather and climate.

Ellis, emeritus professor and distinguished professor of complex systems at UCT, picked up the academy's five-star prize, the Science-for-Society Gold Medal, two of which are awarded each year. The citation for the laurel was delivered by one of Ellis' close colleagues at UCT, Professor Daya Reddy, dean of the Faculty of Science.

Ellis' prodigious output over the past 40 years includes over 300 articles or chapters in books, plus 12 books that span cosmology, complexity, neural development and the brain, science policy, social development, science and mathematics education, and the relationship between science and religion. Through his public service, he has also contributed in significant ways to improving the quality of life of many marginalised citizens, said Reddy.

"[He] is indeed one of the most distinguished scholars, past or present, that this country has produced."

Others honoured at the ceremony were Dr Graham Baker, editor of the South African Journal of Science for the past 30 years, and Philip Tobias from Wits University, who has stepped in as editor when the occasion urgently called.

In turn, physicist Professor Vivian Alberts of University of Johannesburg received the Young Scientist Award for his work on solar-energy devices. The other Science-for-Society Gold Medal went to Tom Bothwell, professor of medicine at Wits, renowned for his research into iron metabolism.