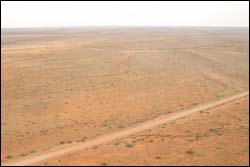 South Africa is forging ahead to clinch what is probably the country's largest post-apartheid SET (science, engineering and technology) project to date - and UCT staff and students are closely involved.

The project is the international SKA or Square Kilometre Array radio telescope. And simply putting the bid package together to house the telescope will be a huge boost for the country's science and engineering capabilities at educational institutions across all levels.

Both projects are part of immediate preparations that will bolster the SKA bid. The cutting-edge facility for radio astronomy will also provide enormous opportunities to build capacity in industry and related commercial enterprises across the board.

Designed to be 100 times more sensitive than any telescope yet built, the SKA aims to reach back to emissions from the Big Bang and allow radio and other astronomers to learn more about the cosmological background of our universe.

The project is a truly international one and promises a huge opportunity for skills sharing, research and resources. South Africa is in partnership with Europe in its SKA bid. Other countries competing for the project are the United States, Canada, the European Union, Japan, China and Australia.

Although it is at least 10 years before construction on the SKA begins, Africa and Australia are already ahead of the pack and are the strongest contenders in terms of offering the best site for the array. Both continents offer the best physical location for visibility of the universe and radio quietness.

Following on the success of SALT (the South African Large Telescope), which opens officially later this year, the South African government is an enthusiastic supporter of the SKA bid and is funding the bid committee under the leadership of Dr Bernie Fanaroff.

The SKA is due for construction only around 2015, but site surveys are already underway in South Africa as well as in South America, Australia and China. Site allocation will take place next year.

Meanwhile, the process of putting together a competitive bid package is well underway, with UCT staff and students already hard at work on preliminary projects.

"Preparing ourselves for the SKA presents a real challenge to our scientific and technological communities," said Professor Mike Inggs of UCT's Faculty of Engineering and the Built Environment, "but there are huge gaps in our capabilities at the moment."

The South African government has authorised the construction of a radio telescope, aiming at contributing to international expertise leading up to the SKA itself. The Karoo Array Telescope (KAT) is a "pathfinder" project that will significantly bolster South Africa's SKA bid by beefing up scientific and technological capabilities in critical areas. It will also provide enormous opportunities for training and research.

Inggs is an advisor for the KAT's systems engineering team and responsible for radio frequency (RF) subsystems.

Others on the KAT team are former UCT staffers Dr Jasper Horrell, who is head of computing and software development, and Dr Alan Langman, who is head of digital signal processing. Thomas Kusel (MSc, UCT) is the system engineer, and UCT graduates on the engineering team are Dr Mattieu de Villiers, Andrew Martens, Etienne Bauermeister and Dr Marc Welz. Research officers involved from the Radar Remote Sensing Group in electrical engineering are Thomas Bennet and Dr Richard Lord.

The KAT will be at least as sensitive as any telescope in the Southern Hemisphere, but with a much faster survey rate. It will have a limited bandwidth (700 to but will use the latest digital hardware signal processing to enable a very high survey speed. The system will produce multiple, independent beams to facilitate rapid survey, and the KAT will complement existing SALT and other optical telescope facilities at Sutherland.

In addition, the KAT will be an important complement to the capabilities of the already well-established and respected HartRAO radio astronomy facility at Hartebeesthoek.

HartRAO, an abandoned Deep Space Tracking Station used by NASA in the 1960s and 70s, is an important node in the Very Long Baseline Interferometer experiment that measures continental drift. It is staffed by a small complement of experienced radio astronomers under Professor Justin Jonas of Rhodes University, who is now the chief scientist of the KAT. Professor Gerhard de Jager, recently retired from UCT, was one of the principal academic users of the HartRAO while he was at Rhodes, and supervised Jonas' PhD.

Along with raising interest in radio astronomy, it is hoped that the KAT project will inspire an awareness of SET in schools across South Africa, as well as enhance cooperation at tertiary level.

"We hope to build cooperation between optical and radio astronomy, which are at different ends of the spectrum and offer different perspectives," Inggs commented.

The KAT is on schedule for construction within the next four years.

Each dish antenna of the array will be fed, in turn, by a small array at its focus. A test 4X3 feed array will be ready for testing by the middle of next year, with a single, experimental antenna with full feed array ready by the end of 2006.

A test link to this antenna and to the HartRAO facility should be up and running by early 2007. After this, a fully engineered prototype will be developed over the next year, followed by full-scale production of the KAT over the following year or so. The present budget allows for about 20 antennas.

While the eventual size of the KAT will depend on available funding and the possibility of overseas partners, international partnerships are already being forged.

Inggs is working closely with Australian scientists on RF hardware. Initial digital boards for the 4X3X2 array and imaging software are also being procured from the Australians. Collaboration with The Netherlands (ASTRON), US (Berkeley) and the UK is also being discussed. The local teams are using this technology as a springboard to develop hardware and software for the KAT.

Ex-South Africans in the US and elsewhere are already collaborating on development and design. At home, postgraduate and postdoctoral students in a variety of fields are encouraged to put KAT-related project proposals on the table, and to apply for funding that has been earmarked specifically for the project.

Three UCT students are already involved in KAT projects. Monica Wu (MSc) is working on end-to-end simulation and testing of the KAT receiver; Andile Mngadi is working on end-to-end simulation of the RFI (radio frequency interference) measurement system being utilised for the SKA site search in South Africa; and Sydney Dunn is assessing the RFI measurement protocol and comparison to local data.

Local and national industry is encouraged to come to the party. Benefits to industry will flow immediately from the KAT project and will also provide industry with an opportunity to position itself to participate in the SKA, even if it is not constructed in South Africa.