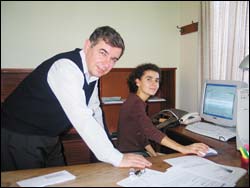 Family ties: Prof George Janelidze and his daughter Tamar, an MSc student in the Department of Mathematics and Applied Mathematics.

It was the 18th century mathematician and astronomer SimÃ©on Poisson who said: "Life is good for only two things, discovering mathematics and teaching mathematics."

Janelidze, a leading research scientist of the Mathematical Institute of the Georgian Academy of Sciences (Tbilisi, Georgia), with a PhD from Tbilisi State University and a DSc from St Petersburg State University, joined UCT in 2004.

His area of expertise is the most abstract or pure mathematics called category theory, which, following set theory, makes a second attempt to unify all branches of pure mathematics.

Category theory was invented by two of the 20th century's mathematical giants: Samuel Eilenberg and Saunders MacLane. Their landmark 1945 paper, General Theory of Natural Equivalences, introduced a new language that transformed modern mathematics. Moreover, most of the latter mathematical developments would have been unthinkable without that language.

Apart from this, category theory has achieved much as a field of study in its own right, and its theorems have significant applications in algebra, topology, algebraic geometry, and mathematical logic.

Janelidze counts himself fortunate. Although isolated from the West in the former USSR for more than the first 30 years of his life, he capitalised on opportunities to collaborate with a range of distinguished mathematicians (many of whose names appeared on the books and papers he studied).

These luminaries include MacLane, who gave a talk on Janelidze's work at an international conference in category theory in Belgium, as well as GM Kelly, the founder of the Australian school in category theory, with whom Janelidze has written eight papers. Other collaborators hail from Belgium, Canada, France, Italy, Portugal and the United Kingdom.

He also pays tribute to George Chogoshvili, the founder of the topology school in Georgia, as well as Hvedri Inassaridze, Chogoshvili's student and Janelidze's former supervisor. Both played a significant role in his academic endeavours.

In addition, he is editor of four international mathematical journals a member of the scientific committee at Tbilisi State University responsible for awarding PhD and DSc degrees in mathematical logic, algebra, number theory, analysis, geometry, and topology. (Janelidze has three PhD students in Georgia and two in Portugal.)

The A-rated researcher has two children following in his footsteps: son Zurab and daughter Tamar, who are both conducting research in category theory. Zurab has his PhD ready for submission to Tbilisi State University and Tamar is an MSc student at UCT.

Though a long way from his native soil, the new A-rated researcher says he has found a home in the Department of Mathematics and Applied Mathematics.

"They have a strong research group in categorical topology, founded by Keith Hardie and Guillaume BrÃ¼mmer, not to mention many other good mathematicians in a wonderfully friendly atmosphere. It is such a good place to work."