Celebratory book on our Nobel Laureates 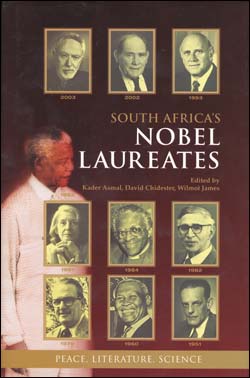 Three of the laureates have direct contacts with UCT, two in science and one in literature, and several of the contributers have UCT links.

UCT alumnus Allan Cormack shared the Nobel Prize in Physiology or Medicine in 1979 with Godfrey Hounsfield for work that led to the development of computerised axial tomography, otherwise known as the CAT scan.

Another UCT alumnus, Lithuaninan-born Aaron Klug, was awarded the Nobel Prize in Chemistry in 1982. Starting in the 1950s, he used electron microscopy and structural modelling to study the three-dimensional nature of polio and other viruses.

UCT's most recent laureate is author JM Coetzee who was professor of English literature at UCT and who won his prize in 2003 for an impressive and much-lauded body of literary work.

This book celebrates them all, but in addition, it also features introductions to each of the laureates by well-known South Africans, among them vice-chancellor and principal Professor Njabulo Ndebele, who had the formidable task of writing an introduction to the entry on former president Nelson Mandela, who won the Peace Prize with former president FW de Klerk in 1993.

Aside from these luminaries, the most striking feature is the inclusion of the pithy and cogent Nobel citations, which are only two or three pages in length, followed by the lectures delivered by the laureates themselves.