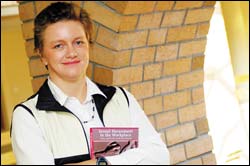 Speaking out: Rochelle le Roux has co-authored a new book on sexual harassment, which points to some significant changes in the law and its implementation.

Remember when sexual harassment used to be funny? Back when cartoons abounded, showing bosses chasing buxom, short-skirted secretaries around the desk, or of those secretaries cosily propped on the bosses' laps to, you know, take dictation.

Well, over the past few decades the world has learnt that, actually, it was never that funny for the secretaries. And now, in court case after court case, the smiles are steadily being wiped off the bosses' faces, too.

Here, the United States, among others, has been leading the charge, its legislative track record going back to the mid-1960s (about the time that feminists there coined the term "sexual harassment"), and its courts have not been shy to hand out heavy penalties - $7.1-million in one incident.

For a long time, South Africa lagged behind. But that's changing, says Rochelle le Roux, deputy director of the Institute of Development and Labour Law at UCT, in her new book, Sexual Harassment in the Workplace: Law, Policies and Processes, which she co-authored with Professor Alan Rycroft of the University of KwaZulu-Natal and attorney Thandi Orleyn.

These days, victims of sexual harassment in the workplace can fall back on everything from the Constitution to the Labour Relations Act, as well as the Employment Equity Act and the Promotion of Equality and Prevention of Unfair Discrimination Act.

"So one has in effect the Constitutional imperative being supported by a battery of legislation," said Judge Roseni Allie of the Cape High Court at the official launch of the book at UCT recently.

Then in August, the National Economic Development & Labour Council (NEDLAC) also released the Code of Good Practice on the Handling of Sexual Harassment Cases, which, says Le Roux, will form the bedrock for employers' in-house policies.

The code is historical. Gone are the days when touching was the be-all of sexual harassment. Now, as defined by the code, it includes verbal forms of harassment - unwelcome innuendo or dirty jokes, say - or even non-verbal harassment like indecent exposure. Or even the threat or promise to influence the person's employment or career opportunities. The psychological aftermath of such harassment is now also taken stock of.

"Sexual harassment is not always about physical desire," says Le Roux. "It's often about power play."

But, as the authors of Sexual Harassment in the Workplace show, South Africans are beginning to find their voice. When Le Roux and Rycroft first had the idea for the book - following a labour law conference where they were both speakers - they could think of but nine or so cases where victims had taken perpetrators to court.

When they looked closer, they found that the number had grown to

"Suddenly we were aware of the prevalence of the problem and the urgency for transformation," says Rycroft.

There were a few watershed cases. Such as the one Le Roux had presented at the conference, brought by a secretary against publishers Naspers, who, despite the victim's complaints, had not acted to stop her harassment. She won and was awarded compensation of the largest award yet in a sexual harassment claim in the country at the time.

"It was the first time, in this country in any case, that an employer was found vicariously liable for sexual harassment," says Le Roux.

In fact, when Naspers appealed, the Supreme Court of Appeal upheld the finding, basing its own judgement on the common-law duty of the employer to provide an environment free of sexual harassment.

Suddenly, employers were also in the firing line. Especially if they had no policies and procedures in place or, as has happened, had adopted a see-no-evil-hear-no-evil approach.

They will find the new book very handy. Rycroft has included a to-do list, outlining steps that employers can follow to mediate charges of sexual harassment.

It's a list everyone will be the happier for.

Sexual Harassment in the Workplace is published by LexisNexis Butterworths.