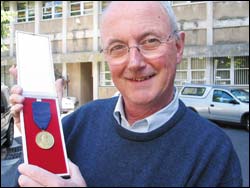 All that glitters must be gold, or at least in the case of geophysicist George Smith's Rudolf Krahmann Memorial Medal award.

The medal, minted from over an ounce of 18ct gold, was presented to Smith, a senior lecturer in geological sciences, and alumnus Maurice Gidlow by the South African Geophysical Association (SAGA).

It's the highest honour bestowed by SAGA on geophysicists in South Africa, recognising either research, services to the field or the development of new applications or techniques.

Smith and Gidlow got the nod this time for their pioneering work in the analysis of the variation of seismic reflection amplitude with angle of incidence in reflection seismic surveys.

These surveys are done mainly in the exploration for oil and natural gas but, in South Africa, have also been widely used in mapping gold and platinum reefs.

In 2002 the duo bagged the Reginald Fessenden award of the international Society of Exploration Geophysicists in the US for their development of the geostack technique. Their classic 1987 paper in the European journal, Geophysical Prospecting, describes this technique, using a new seismic indicator, the fluid factor.

"The fluid factor indicates the presence of gas- or oil-saturated sandstone reservoir rock, and is also used in rock-property estimation," Smith explained.

Their paper has been widely cited and led to the technique - or similar techniques - being used by the oil exploration industry. The citation to the Krahmann award states that it is the only "really important" technique in the field of reflection seismic surveying that has been developed by South African geophysicists.

It bears the name of German Rudolf Krahmann, one of the most renowned geophysicists in South Africa's history.

Smith heads up the South African Petroleum Studies Programme, a joint programme of the Universities of Cape Town, Western Cape and Stellenbosch. It aims to build capacity in geosciences as applied to oil and gas exploration and development, and is funded by Tullow Oil and the Upstream Training Trust, which represents all the players in South African oil and gas exploration and production.

Smith was also a delegate (courtesy of the Petroleum Agency of South Africa) at the recent World Petroleum Congress in Johannesburg, attended by the world's petroleum company leaders. Smith co-chaired a session on Challenges in Seismic Exploration.

The mood among the top oil producers was surprisingly upbeat, given the fallout from Hurricanes Katrina and Rita, and oil production in the Gulf of Mexico. An October 1 Energy Information Administration report said oil production had been reduced by 1 356 million barrels a day.

They (the pundits) gauge that the energy mix (hydrocarbon, coal, nuclear, biofuels, hydropower and other alternatives) will remain relatively unchanged in the foreseeable future.

"Some say we have crested the peak in terms of the world's petroleum production, but the mood of the congress was much more optimistic," Smith commented.

Producers are looking at other fossil fuel sources: notably the oil-rich shales and tar sands found in countries like Venezuela and Canada. Extraction, however, is not always commercially viable. There is also the promise of the huge gas-hydrate stores on the continental shelves and slopes.

Interestingly, talk around the emission of greenhouse gasses probed the practicability of recovering carbon dioxide, the major cause of global warming, and pumping it into producing oil reservoirs, oil companies thus standing the chance to improve oil recovery from their reservoirs and also to gain valuable credits in terms of the Kyoto Protocol.

At the end of the congress, two new initiatives were announced. A portion of the profits from the World Petroleum Congress are to be devoted to scholarships for students in the petroleum arena. And PetroSA announced that they and their partners would be adding their financial muscle to enhance the SA Petroleum Studies Programme.