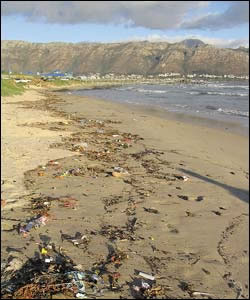 Life's a dirty beach at the Strand.

The recent beach-cleanup in the Helderberg area, part of International Coastal Cleanup week organised by the Marine and Coastal Management and KwaZulu-Natal Wildlife, revealed an interesting trend.

Nearly 80% of the marine pollution comes from land-based sources and activities, says UCT's Dr Marienne de Villers (Avian Demography Unit), who coordinated one of the cleanup drives, along with colleague Silvia Mecenero.

"The entire week was dedicated to removing man-made debris from coastal and marine environments, and to improving public awareness, thereby enabling people to become part of the 'pollution solution'," she said.

Passers-by, young and old, were roped in to help with the cleanup on Greenways Beach (Strand).Unfortunately, the underwater cleanup, planned for a popular fishing spot at Harbour Island in Gordon's Bay (apparently very badly littered), had to be cancelled.

Almost zero-visibility and a big swell resulted in the effort being transferred to the relatively clean site of Manganese Mine (near Rooiels). Seven divers, including two UCT students, Duane Fourie and Ciaran MacDevette, braved the steep climb to the dive site.

"About 1.5 km of beach was cleared and 15 refuse bags (about 110kg in total) were filled with beach litter," De Villiers estimated.

Most of the litter did not originate from fishing activities but from land-based sources and activities.

"The most common items were plastic bottles and their lids and caps, sweet wrappers and drinking straws. Relatively few plastic bags were found, a sure sign that the recent 'bag tax' at shops has been really effective in reducing this type of litter. Maybe a charge levied for drinking straws and a refund on plastic bottles will work equally well?"