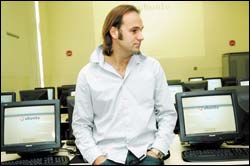 Out in the open: Mark Shuttleworth continues to tout open-source software, and has now opened a computer laboratory at UCT to do the same.

Over the past years, the SA business hero - and poster billionaire for South African entrepreneurship - has kick-started a number of public initiatives using this "freeware". So, for example, he and his Shuttleworth Foundation fund the Ubuntu Linux project, an operating system that is freely available with both community and professional support and which, Shuttleworth says, brings the spirit of Ubuntu ("humanity to all") to the software world.

He also founded and bankrolls work on SchoolTool, an open-source administration system for schools in South Africa and beyond.

Now he's getting UCT students in on the act. Last week, he made an early-morning visit to the campus to officially launch the Shuttleworth Open Source Laboratory, hosted by the Department of Computer Science. (The lab, by the way, has been up and running for three months already.) The Shuttleworth Foundation awarded R1-million to the facility, one of four it has opened at South African universities thus far.

The purpose of the lab, as the name suggests, is to promote the use of open-source software. It is foreseen - as has happened already - that mathematics and statistics students will, from the lab, use and manipulate already existing open-source packages in their work, or just play around with these to see what they can do.

"I hope that this is a laboratory where students will explore the next generation of interesting ideas," said Shuttleworth at the opening. "For them to be leaders in that future, they need the opportunity to come here, of course, and also the space to go and explore things that perhaps the lecturers and staff and the curriculum haven't yet started to address, haven't yet fully embraced because they're still too new."

Open-source software is a global phenomenon, but has yet to take off in a big way in South Africa and the rest of the continent. Its big advantage, of course, is that students - and perhaps institutions and, ultimately, the country - can save on the king's ransoms that have to be shelled out to the multinational software developers for the right to use their products.

"By the use of open-source software, which is free," says Professor Ken MacGregor, HOD of the Department of Computer Science, "you don't end up paying licence fees, and you can use the money, instead of it going to big companies, for the development of the country."

And that way maybe beget the next generation of Mark Shuttleworths.