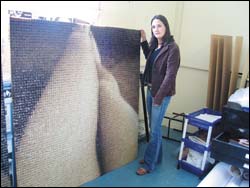 Body of work: Pam Stretton's autobiographical works won her a category and main prize in the Vuleka Art Competition.

Struggling with an eating disorder 10 years ago, master's student in fine art Pam Stretton probably never imagined it would provide the inspiration for an award-winning self study.

Her series of nine images, The Encoded Body, won the Vuleka Art Competition, not only the printmaking and photographic category, but the overall prize, too, a return flight to Paris with for her pocket.

Her work is striking on a number of levels, each painstakingly worked into the large images that have the lustre and texture of mosaic.

From a distance, they resemble huge, overblown, pixellated digital photographs. And they are photographs, studies of her body: legs, mouth, eye, breast, buttocks, each painstakingly reworked, the images reduced to a grid of tiny, tiny blocks, cut out and rejoined.

Each is layered with iconography that reflects the individual themes that have caused women to obsess about their bodies; the dials of a scale (she weighed 35kg at her lowest point), the titles of self-help books, diet foods, the media's infatuation with emaciated women as models of feminine beauty.

Painstaking? Yes. But there is no madness to her method. Instead, the construction of each image is deliberate; mirroring the compulsive nature of the anorexic or the bulimic, incorporating elements of obsessive control. Each picture took two weeks to build. She's been busy since August 2004.

"The grids are a metaphor for control and conformity," she explains. "The method was an important part of the artworks."

The images are variously named: Size Matters; Shop Right, Select Cut, the latter the name attached to the image of her legs and the crude references that equate women to pieces of meat.

Ironically, Stretton hails from a cattle and sheep farm near Queenstown.

"Meat is the first food I stopped eating and the last food I started eating."

Three years of research have gone into this work.

"It's an informed body of work," she says. "It is loaded with information and layers and layers of meaning."

It couldn't have been easy to do, baring her soul in this way. She agrees, but says the process was cathartic.

"It [the series] is autobiographical and I had to deal with my illness head on. The story is about me and once I accepted that, it was easier."

She's been well for a long time. It was time to package the experience. She's over it.

Riding on the success of her win, Stretton hopes to hold a solo show next year. She has already entered work in The Brett Kebble Art Awards, scheduled for February. Despite the shadow caused by his death last week, indications are that the awards will go ahead.

Beyond that, Stretton fancies curatorship or even an art and framing studio of her own; complementary crafts that will bring her full circle.