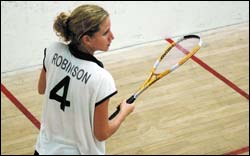 Taking the mantle: Gina Robinson had to take over the lead role for the UCT squash team, and came into her own.

In 2004, the quartet of Annie Aling, Angela Bonora, Siyoli Lusaseni and Gina Robison became the first UCT women's squash team to win the WP league title in all of 13 years.

If anyone thought that was just a flash in a pan, the UCT four, with first-year student Anndrea Naidoo standing in occasionally, have now proved them wrong. The team has successfully defended its title, wrapping up things with three wins in their last three matches in September.

It was skin-of-the-teeth stuff in the end, though.

Although UCT won 16 of their 18 games, they only just pipped Camps Bay - who'd jacked up their game and were breathing down UCT's necks all the way down the home stretch - by a mere three points. (Points are awarded for sets won, with two bonus points also going to the winning team.)

But even in that face of such tough competition, the UCT women never put any pressure on themselves, says captain Aling.

"We all believe that enjoying the game comes first. If we do win, then it's a bonus."

It's a lesson that the ultra-competitive Lusaseni, the top-ranked player in Western Province and part of the SA side not too long ago, had to take to heart. She had to closet herself with her chemical engineering books this year, which meant less court-time. And a few more defeats than she's used to.

"On the whole, though, I'm glad things worked out the way they did," she says. "I learnt to love the game again - I learnt to not take it so seriously, and I learnt a lot about myself as a player and a person."

Any other year, Lusaseni's taking a few steps back could have spelt the end of UCT's title defence. But Robinson filled her shoes with aplomb. By mutual agreement at the start of the season, Robinson had taken over the number one UCT shirt, which meant she had to square up to the other teams' top players.

It was a role that fitted her to a T. Not only did she win 15 of her 16 games - her only defeat was at the hands of WP number one Karen van der Westhuizen - but it also gave her own standings a leg-up.

She's now moved up to number two player in the province, and 14th in the country. She even bested Lusaseni in the UCT Open in September.

"One's standard rises according to your opponent, so that's definitely a benefit," says Robinson.

Things will likely change for the squad come the new year, as Bonora is expected to graduate in December and move on. That could lead to regular spot in the team for Naidoo, all-conquering in KwaZulu-Natal - she even competed against the men - before she came to Cape Town for her business-science studies.

Here, she's tasted defeat once in a while.

"For me," she says, "coming from KwaZulu-Natal where I was top all the time, it was a challenge. But it was improving my game."

And with Naidoo keen to get stuck into the best that the province has to offer and the rest of the players hitting their stride, the team could well make it three in a row in 2006.

All the while enjoying their game, of course.