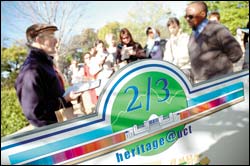 The chequered past: Prof Howard Phillips (far left), tour leader, and Prof Njabulo Ndebele take guests on the first walk along the Heritage Trail on September 7.

The University of Cape Town boasts, as Historical Studies' Professor Howard Phillips would have it, a "contested heritage".

The land it occupies was once used by Khoisan pastoralists to graze their cattle, was later converted into farmland by Dutch and British colonists and their slaves, before, in 1918, it became home to UCT.

The university's very founders also come with baggage - Cecil John Rhodes, whose gift of land made the erection of UCT on this site possible, is the perfect example of one man's captain of enterprise being another man's imperialist. Depending on who you speak to, he and other historical figures are either heroes or villains, respected or reviled. Or, for the undecided, both at the same time.

So, too, the actions of UCT individuals or the body corporate during South Africa's bedevilled past are either condemned, or showered with praise.

It's a heavy burden for any institution to carry into a newfound democracy. But it's one, new building names or not, the university is stuck with.

So, instead of glossing over that history, as the institution is often accused of doing, the vice-chancellor, Professor Njabulo Ndebele, has decided to air it for debate.

"It's about laying fresh foundations for the next 175 years," he says.

A few months back, Ndebele set up a Heritage Committee to organise a crop of events that coincided with the heritage month celebrations in the country. Under the heritage @ uct banner, the committee, assisted by some postgraduate students, ran a four-seminar series that examined different aspects of heritage (see more on that inside), and the theme of Music of South Africa was selected for the two Vice-Chancellor's Concerts that will be staged this week. It also developed a Heritage Trail that looks at the history and symbolism on the Groote Schuur Campus.

The vice-chancellor officially launched the Heritage Trail on September 7. This self-guided trail (maps are available from the Visitors' Information Centre on upper campus) comprises 18 sites, each clearly marked with a heritage@uct sign. The trail starts at Japonica Walk, which runs alongside the Kramer Law Building on middle campus, and ends with Mechanical Man, a 1965 sculpture by Lippy Lipschitz, outside Snape Building on upper campus.

Along the way there are stops at, among other places, the Summer House (where Rhodes and his guests sought relief from the summer heat) and the rugby field, at the oft-vandalised Rhodes' statue and at the recently-named Cissy Gool Plaza and Molly Blackburn Hall, both memorialising two of South Africa's more latter-day heroes.

"UCT, through its history, has inherited many layers of heritage - we need to engage with this history and understand how it has evolved over time through the various political and social dispensations," says Professor Anusuya Chinsamy-Turan, chair of the heritage committee.

That engagement started early when comments were scrawled on one of the heritage signs soon after it went up. Even that act of vandalism is an "engagement" of sorts, says Chinsamy-Turan, although a more constructive outlet for responses had already been set up.

Comments on the sites and UCT heritage broadly, as well as offers of photographic memorabilia, can be e-mailed to heritage@cs.uct.ac.za.

See next week's edition of the Monday Paper for a report on Professor Pumla Gobodo-Madikizela's lecture Transcending Trauma and the Legacy of the Past: the Moral Imagination, the final in the heritage lecture series.