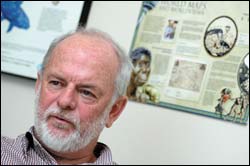 Spoofs of scientists will often stereotype them as bad, mad characters; socially maladjusted, myopic individuals, insular and fiercely protective of their intellectual turf.

A few years back, the Wellcome Trust in the United Kingdom commissioned Market and Opinion Research International (MORI) to undertake a nation-wide survey to find out if scientists thought they were the ones responsible for communicating their scientific research and its implications to the public.

Finding number eight (there were nine key findings) said: "The overwhelming majority of scientists have not been trained to liaise with the media, or to communicate with the non-specialist public."

It's a common failing - and clearly not a new phenomenon. Reason and research tell us that scientists working with public funding have a public duty to make their work accessible, to participate in exhibitions and events, to display their wares, so to speak.

Science communications fundi, Marina Joubert of Southern Science, quotes UCT's own Professor Anusuya Chinsamy-Turan: "One of the major challenges South Africa faces is to make science more appealing and to develop a culture of science among our people, especially among those who were formally deprived."

Dean of science, Professor Daya Reddy, concurs: "The stark reality is that the future of this country - in particular our ability to address successfully the significant social and economic challenges that we face - is inextricably linked to our ability to enthuse young people about science, to ensure that the scientific enterprise is seen as something exciting, accessible and friendly, and so that greater numbers of young South Africans are attracted to careers in science and technology."

Clearly, scientists need to help build a science-literate community for the future. The gee-whiz, bang-pop exhibits that attract today's youngsters may well persuade them to pursue science-based careers in higher education, research and industry.

Leading the pack in this endeavour is the MTNScienCentre at Canal Walk. At the entrance is a list of funders and supporters, generators of science. There's the Mark Shuttleworth Foundation and a chequerboard of companies and educators. But UCT is not among them.

Could that be? The province's foremost tertiary institution, the outfit with the most NRF A-ratings in the country, beneficiary of the most THRIP funding, is not there?

A visit to Professor Mike Bruton, who heads the centre, spells out the brutal truth. Yes, he'd really like more input from UCT. He believes there are many opportunities that remain untapped.

There are some positives. The MRC/UCT Medical Imaging Research Unit, for one, has had two opportunities to contribute to, and gain significant value from exhibits at the MTNScienCentre. The first was late last year when Professor Kit Vaughan's group built and then loaned them a replica of Allan Cormack's original CAT-scanner.

"This featured in their famous South African inventors' exhibition and was earlier this year taken to the National Science Week in Grahamstown," Vaughan explained. "We also contributed to their special exhibit on the brain and this, too, led to considerable positive publicity and enquiries from prospective students.

"We believe it is vital for us to take our work out into the community and the MTNScienCentre at Canal Walk is a fantastic vehicle for this purpose."

Bruton points to the heaps of other South African inventions that show we're a nation of innovators at heart. Take the dolos as an example, named after a sheep's knuckle bone, invented in 1966 by draughtsman Aubrey KrÃ¶ger, who used the design of an admiralty anchor to create an interlocking block that dissipated, rather than resisted, the force of the sea.

Local inventions have even reached the moon, says Bruton. Pratley Putty was used by NASA on several lunar landers. "We are a smart nation," he wrote in a recent Financial Mail, "at the cutting edge of innovations in many fields. We need to celebrate this and stride into the future with confidence, on the shoulders of giants."

Keen to change the status quo, the Science Faculty Communications and Marketing Committee, chaired by Chinsamy-Turan, has set up an official relationship with the MTNScienCentre. Professor Tony Fairall (astronomy) is the liaison person.

"This new, formally established collaboration with the MTNScienCentre will build on the linkages that we already have there, and I believe will enable our committee to more effectively reach wider audiences in our drive to communicate and promote science," Chinsamy-Turan said.

They are keen to hear about any material built to exhibit or display science at work.