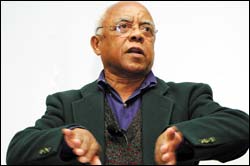 In this extract from his lecture on the role of the university in the use and intellectualisation of African languages, Professor Neville Alexander argues for a concerted effort to change the status quo.

(An intellectualised language is one)
...
which can be used for educating a person
in any field of knowledge from kindergarten
to the university and beyond
(Sibayan 1999:229)

In a nutshell, we need to develop the African languages to the highest possible levels in all sectors of society. We need to eliminate the existing diglossia, and English or French, for example, should become a universal second language in most parts of Africa, not unlike the situation with English in some of the Scandinavian countries.

They should not only be languages of the elite, which they are at the moment, the means by which the rest of the population is cut off from the modern sector, virtually completely.

It is essential that we begin advocating in all our countries the rehabilitation of mother tongue-education within the context of a bilingual educational system where the other language in most cases will be English or French. In other words, mother tongue-education from the pre-school right through to the university with English or French as a supportive medium, or in some cases, certainly at university level for a long time probably, also as a formative medium. This is the fundamental conclusion that we have to come to.

Every African language department at every university or college has to propagate and support this particular demand. Everywhere in the world people use the mother tongue to teach their children. It is only in post-colonial Africa and a few other countries in South-East Asia and Eastern Europe that people use a foreign language to teach their children, and as a result we have the terrible drop-out rates, repeat rates and failure rates that we know so well. This paralysing practice, more than any other, explains the fundamental mediocrity of intellectual production on the continent of Africa.

We have to persuade our communities about the potential of African languages as languages of power and languages of high status. It is our task as language activists and professionals to do this. It is the task of the political, educational and cultural leadership of the country to do this and to be role models in this regard.

We know that it will take time. We know that people have imbibed, because of oppression, because of apartheid and racism, the idea that all good things come through English (or French) and that African languages are fine for the family and the church and for the immediate community, but otherwise they have no role to play.

We also know that this is wrong, just as we know that it is wrong for people who are not involved in stable one-to-one sexual relationships to refuse to use condoms or other suitable prophylaxis because of the danger of becoming HIV-positive.

We also know that we can change people's behaviour. Let us stick to AIDS as an example. Consider Uganda today: because of a particular approach, which allowed people to go from door to door to explain frankly, candidly and honestly to those who did not know how AIDS is spread and where it comes from, people's sexual behaviour in that country has changed.

We can do the same with mother-tongue-based bilingual education. We have got to persuade people to understand that mother-tongue-education is in fact the doorway to success, not only in general terms but also the doorway to the learning of English, French, or any other language as a second language. Everybody who has studied language education knows that this is true, that the sounder your foundation in a mother tongue, the more easily you learn a foreign language or a second language.

That the argument about lack of resources is a cover for lack of commitment can be shown very clearly in many different ways. The best example in Africa is Somalia, where a poor country, admittedly under the authoritarian government of Siad BarrÃ©, made Somali into a language of tuition and of training from the cradle to the university without resorting to English or to any other foreign language. We had the same situation, and it is still the case to a very large extent in a country like Ethiopia where Amharic used to play a similar role in some disciplines. Of course, there are other problems in Ethiopia, but that it is not necessarily the case that we must use English or, for that matter, French, is very clear from these, and other, examples. Ultimately, it is a question of commitment, of the willingness to view things from the perspective of the urban and the rural poor rather than from the convenient vantage point of the middle classes.