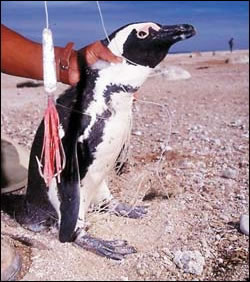 The incidence of litter swallowing among southern African seabirds is among the highest in the world.

To counter this alarming statistic, Avian Demography Unit's Dr Marienne de Villiers is coordinating an underwater clean-up at Harbour Island, Gordon's Bay, part of the September 12 to 17 International Coastal Cleanup Week. At the same time, her colleague Silvia Kirkman is orchestrating a cleanup of Strand Beach.

The week has been organised nationally by Marine and Coastal Management and KwaZulu-Natal Wildlife. Altogether 123 countries are involved in the initiative.

This entire week will be devoted to removing man-made debris from coastal and marine environments.

Marine litter is bad news for the human and animals users of our coastlines and seas.

"Plastic litter is the biggest problem as it hardly degrades at all once at sea," De Villiers explained. "It can drift for years over vast distances."

Marine creatures such as whales, seabirds, dolphins and seals become entangled in fishing line, rope, plastic bags and strapping, debris that finds its way into the world's oceans. As this material cuts into the animals and birds and restricts movement and growth, they die a slow and painful death.

The African Penguin, which breeds at Boulders and Stony Point, and which relies on False Bay waters for survival, is one of the species most at risk.

Swallowing marine litter is the biggest danger as this blocks the digestive tract.

Sometimes the amount of rubbish in an animal's stomach becomes so great that it loses the urge to eat and gradually starves. Either way, illness or death is the result. Swallowed plastic also contain poisonous chemicals.

Off South Africa, at least seven species have been recorded to be "swallowers of marine litter", a huge problem for animal visitors from the sub-Antarctic, such as albatrosses and petrels, which mistake floating plastic junk for food.

And keeping South Africa's coastline clean is also an expensive business. In 1995, for example, more than R8-million was spent cleaning our beaches.