A first for handyman 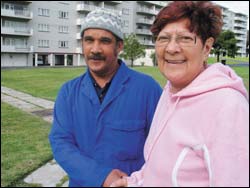 A job well done: Handyman Vernie Japhta and Joy April at Forest Hill. Japhta worked for the previous owners for 19 years and has been with UCT

And when the Hares, the previous owners who employed him as a handyman, sold the complex to UCT some years ago, the tenants became students, all 687 housed there.

They too come and go. But Japhta remains, tending the buildings and their electrical and mechanical workings.

He remembers planting the lawn at Forest Hill in the days his father, John Japhta, worked there. And he has stories to tell: like the one about gun-brandishing bank robbers who hid out in the laundry at A block, hoping to dupe the police.

Fugitives, they proved more dangerous to evict than any erring tenant.

Japhta's talents lie in his hands. Fix a bed. No problem. Rewire a plug. Done. Even the vegetables on Reenskies Farm in Ottery, where he and his family have lived for years, thrive under his ministrations. It's all in his green fingers. He's a lover of the land. His life is in his hands.

Yet he has no papers that certify his abilities as a handyman. Colleagues say he eschews courses and training sessions, fearful of the dreaded exams. But finally, he was persuaded and the Forest Hill maintenance man has his first certificate, formally endorsing his abilities to work with electrical appliances and the like.

It's a major coup, not only for Japhta, a modest and quietly-spoken man, but also for his colleagues, many of whom stood by him, encouraging him to attend the training course at the Belhar Northlink College. They even arranged transport to make sure he got there.

His lecturer remarked that he had plenty of potential. But by the second day, Japhta admits he wasn't keen to go back. The cajoling by colleagues continued - and so did he.

It was an emotional moment for Japhta when director of student housing and residence life, Dr Ian Mackintosh, presented his certificate at a ceremony attended by his supervisor, Joy April (residence operations manager) and applauding colleagues (19 of them had been on the course).

"Our handymen are such an integral and vital part of the team here at student housing," said a delighted April.

His family, wife Irene and children Bradley, Lauren and Ethan, are also delighted with his achievement.

Japhta's father, John, also worked at Forest Hill, so does his brother, Andrew (staff housing). His training was watching and doing what his father did.

Geysers are the only things he's wary of. Japhta says he had a bad experience once, when some wires were live and there was an explosion.

Another course? Japhta shakes his head furiously. Enough is enough. It's raining and the soaking will be good for the vegetables back on the farm. And that, really, is where his heart lies.