Women's tennis on the way up 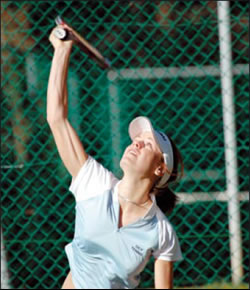 Captain courageous: Siobhan Simpson has led the UCT women's first team to the premier league, a famous moment for the club.


Not for a long time has a women's first tennis team from UCT featured in the premier league.

But thanks to the hard work of captain Siobhan Simpson, and team members Candice Faye, Amy Reid, Bronwyn Simpson and Caitlyn Smythe, together with coach Jackie Booth, UCT will now have a presence among the upper echelons of tennis leagues.

"The second half of the season was tougher as we had to play the stronger teams," explained Simpson. "We drew two games and we never lost a match. One of our draws was against the Stellenbosch first team and they are usually much stronger than us."

Simpson says the team has excelled this season thanks to extra practice sessions and the addition of young blood in the form of two first-years (Simpson and Faye).

The team will receive a further boost when they enter the big time next season after securing the top South African junior tennis player, Kate McDade from KwaZulu-Natal.

Consistently ranked in the top three as a SA junior and as high as 94 in the world in the under-18 age group, McDade has turned down tennis scholarships from universities throughout South Africa, as well as the US and Africa, to attend UCT next year.

"We heard that Kate was interested in coming to study at UCT instead of going overseas, so Jackie phoned her. It was as simple as that," Simpson added.

Booth believes McDade will be a great addition to a team that is already on its way up.

"Her arrival will certainly raise the bar and set the stage for even more awards in the future," she said.

Although the season officially kicks off on September 3, be sure to keep an eye on the team when they play their first doubles (ladies and mixed) match on September 10. The ladies' league gets under way in January.

"UCT hasn't been in the premier league for at least five years. Our main goal for next season will be just to stay there," noted Simpson.